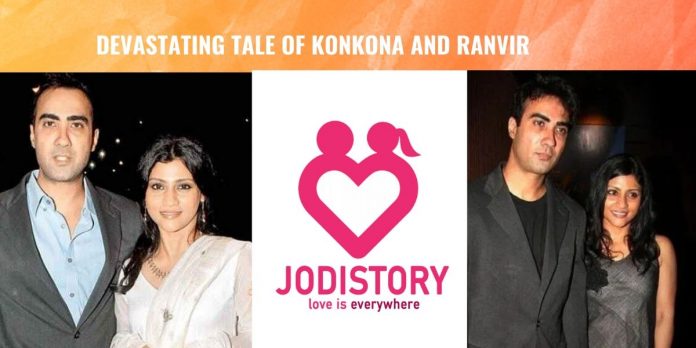 It seems as if the entire B-town has taken up the Divorce challenge. With superstars like Hrithik Roshan, Malaika Arora, Farhan Akhtar, now one more addition in the list has come up. Konkona Sen and Ranvir Shorey have decided to call it quits legally after years of separation. Read below the devastating love story of Konkona and Ranvir!

Konkona Sen met Ranvir Shorey on the sets of “Mixed Doubles.” They met during the time of scripting the movie. They spent a lot of time together amidst heavy work schedules and extreme pressure.

However, the duo soon realized about their compatibility with each other. Surprisingly a reel love story helped to evolve the love story of Konkona Sen and Ranvir Shorey.

With more quality time spent together, the couple fell hard for each other. It was a hush-hush relationship wherein speculations were running riots. Their relationship was kept secret from the nagging paparazzi.

However, their joint public appearances confirmed their unannounced status of the relationship.

Eventually taking their own time, they accepted their relationship in open. The pair also revealed their engagement and live-in relationship.

After dating for three years, the duo decided to exchange wedding vows. They tied the pious knot on Sept 3, 2010. With close friends and family in attendance, the wedding was an intimate affair.

Konkona looked ravishing in Bengali bridal attire whereas Ranvir donned a Punjabi outfit. The newlyweds broke the news to the media later.

The entire B-town wished them luck.

Within a month of their marriage, the news claimed that the couple was expecting their first child. On March 15, 2011, the couple welcomed their baby boy, Haroon in the family.

No wonder the proud parents dote on their cute-little bundle of joy.

In 2013, the reports claimed that their marriage is on the rocks and things are going a bit difficult for the couple. The rumours reached its peak when Konkona stated in an interview that she’s a single mother.

In 2015, Ranvir and Konkona announced their separation through a tweet on Twitter. The Mixed Doubles, the male actor, Ranvir blamed himself for the split.

However, the duo went under counselling to give their marriage another shot. Unfortunately, their efforts to reconcile backfired.

Konkona and Ranvir apply for Divorce

The couple has officially decided to call it quits by applying for a divorce. Despite their attempts to reconcile their marriage, divorce seemed a viable option. It appeared to be a mutual decision.

As per the reports, the formalities are almost over and the confirmation will come out in the next six months.

However, the couple attempted to reconcile their marriage and hence their efforts are appreciated. The duo has decided to share joint custody of their son Haroon.

Hence, it is sufficient to say that Love does not end in happily ever after for everyone. But there is always hope for another love story in making! Isn’t it?