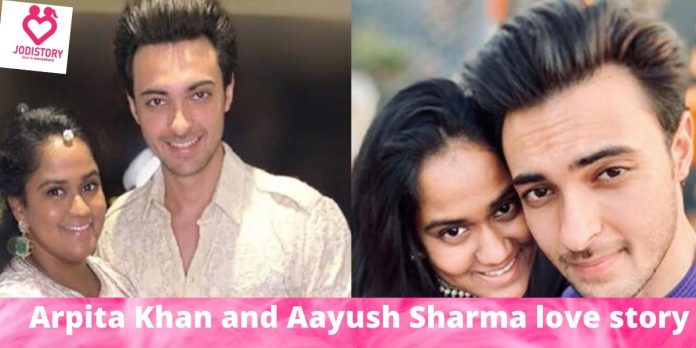 The duo first met in 2013 in Mumbai. They met via common friends at a party.

Soon they got along well like a house on fire. For Aayush, it was no less than “love at first sight.”

After meeting for the first time, the couple lost their touch. But they met again and reconciled their friendship.

Aayush was bowled over Arpita’s craziness and hence the two have been a couple ever since.

From social media P.D.A to their partner’s names tattooed; the only thing that remained was their families approval. Hence, Arpita Khan and Aayush Sharma’s love story sought the approval of their respective families.

Arpita brought Aayush to her home so that he could meet with her family. Arpita expressed her wish to marry Aayush. Much to their delight, their families gave the green signal.

Hilariously, Salman kept asking Aayush whether he was sure about marrying Arpita or not! Aayush’s assurance led to his marriage with Arpita.

Their wedding news left social media to run riots. The rituals started with Haldi and Mehendi ceremony on November 16, 2014, at Galaxy Apartments in Mumbai.

The wedding took place in Hyderabad at Taj Falaknuma Palace on November 18, 2014. The ceremony took place with Hindu-Punjabi traditions. The bride looked gorgeous in a maroon bridal lehenga whereas the groom looked handsome in gold sherwani.

The reception was held on November 21 at The Taj Land’s End in Mumbai. It was a star-studded affair with Brown celebs, political leaders and other influential people in attendance.

Arpita Khan and Aayush Sharma off to honeymoon

The couple took some time together for a honeymoon. they went to New Zealand, Australia and Bora-Bora. Social media kept buzzing with their viral honeymoon pictures.

A year and a half later after their wedding, the duo welcomed their first child in the family. The baby-boy called Ahil Sharma born on March 30, 2016, became everyone’s favourite especially, Salman’s.

Surprisingly, their second child, Ayat Sharma shares the same birthday as her maternal uncle, Salman Khan. Their daughter was born on December 27, 2019. No wonder every family member dotes on these two cute little bundle of munchkins.

Amidst the media-frenzy world and hyped expectations, the duo has managed well so far. They seem to value family above everything else. Their humble nature and grounded behaviour, not to mention their bond towards each other keep their relationship afloat. This adorable couple and their cute munchkins has stolen the hearts of millions.