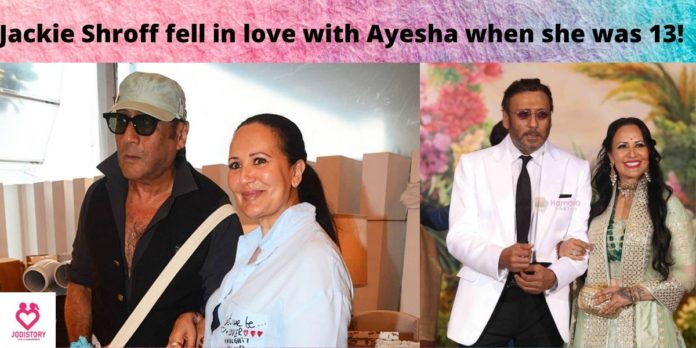 You must have often read about a princess who falls in love with a commoner. But all of us discard such stories claiming that it is too good to be true. However, there is one love story that is indeed a fairytale romance. Whose love story it might be? Well, it is none other than, Jackie Shroff and Ayesha’s love story.

So, let’s read and find out the intricate details.

It proved to be Love at first sight for Jaggu Da when he saw Ayesha for the first time. Ayesha was 13, dressed in her school-uniform hanging from the school bus. Her good looks left Jackie stunned and he fell for her instantly.

Next, he went to her and introduced himself casually. Ayesha shrugged and let the moment be.

Some days later they met at a record shop. Ayesha wanted to buy some records for her. Jackie helped her with the task.

Ayesha couldn’t help but notice the generosity and handsomeness of Jackie. There and then she decided that Jackie will be the man, she would marry.

The courtship period for Jackie-Ayesha

At that time, Jackie had not found his feet in Bollywood. Hence, they would go for low-budget dating.

They would go on long walks through the garden, prefer window-shopping and travel on a double-decker bus.

Hence, a perfect, too good to be true romance.

The most unexpected twist that came in their love story was the moment when Jackie revealed that he was in love with another girl before meeting Ayesha. Even more surprising was Ayesha’s reaction to the situation.

Ayesha was blindly in love with Jackie. She would go to any length to have Jackie in her life. Hence, she wrote a letter to the third girl who was in the U.S. In the letter she expressed her wish to let the three of them stay together.

For Ayesha, it was a do and die situation. She could either live with Jackie sharing his love or she could give up on him. No wonder, she chose the former.

Before they could marry, they encountered another problem. Ayesha’s mother did not approve of the match. Apparently, as a married woman, Ayesha had to live in a chawl. Giving up a luxurious lifestyle, and living with hand to mouth existence is never easy.

The ceremony took place as per Gujarati traditions in Mumbai with close friends and family gracing the occasion. Ayesha eventually moved into a chawl with Jackie.

The happy couple welcomed their first child, Tiger Shroff on March 2, 1990. Tiger is taking after his father, gaining fame for his acting and devious stunts.

They also welcomed Krishna Shroff on January 21, 1993. Hence having a happily-ever-after for an unreal love story.

With Ayesha’s support, Jackie climbed the ladder of success. He gained recognition as a legendary actor. Despite such success, he always remained a family man. Ayesha’s diligent support behind Jackie should not go unnoticed. Ayesha proved that it is always a woman “beside” a man’s success. So, what do you think, isn’t “Jackie Shroff and Ayesha’s love story” too good to be true?