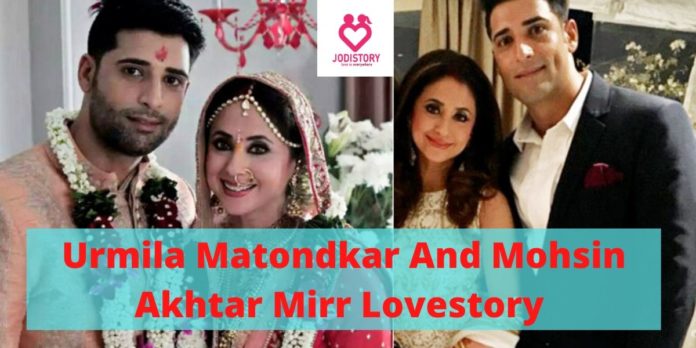 The Chamma Chamma girl Urmila Matondkar one of the best actors in Bollywood. Urmila needs no introduction. Her films in 90s were superhit and that made her so popular in world. She had worked in Rangeela, Bhoot, Satya, Pyaar Tune Kya Kiya, and many super hit movies. And has won ample awards. She is not only an actress but also a Singer. Urmila has sung with Asha Bhosle in album Asha and Friends Vol. 1. Between all this, she had an engrossing Lovelife and lavish marriage. Urmila Matondkar And Mohsin Akhtar Mirr Lovestory is a fairy tale. So are you excited to know all about them? How they both met? Where they married? If yes, then don’t go anywhere. We are going to have a detailed discussion of them. Scroll down to know more.

Who is  Mohsin Akhtar?

Mir Akhtar is a Kashmiri boy. He belongs to a family of businessmen but he loves modeling. For making a career in modeling he left his home when he was 21. He was also the part of The Times of India, Mr. India (2007) competition.

Mir has walked the ramp for designers like Manish Malhotra, Tarun Kumar, and Ranna Gill. And he tried to put his hands in Bollywood with films like Mumbai Mast Kallander, and  It’s A Man’s World. Mohsin Akhtar has three sisters and a brother all are very close to Urmila.

Mohsin and Urmila met for the first time at Manish’s niece, Riddhi Malhotra’s marriage in the year 2014. And as Urmila was also present at the ceremony. Mirr Mohsin was fully belabored by Urmila. According to reports in Mumbai Mirror, he wooed her in absolute filmi-style.

Manish Malhotra adds that: “I am so happy for Urmila and Mohsin. They met at my niece’s wedding in the year 2014. She made a beautiful bride!”

Urmila and Mohsin finally got married in a closed ceremony on 3 March 2016. The wedding was at Urmila’s residence. Only very close friends and members of the family were only given an invitation to the marriage. Urmila adds that:

“We both kept it an exclusive marriage with just family and close friends at the celebration. Since our families want marriage to be a close affair. We both thought to keep it private. We seek your blessings on embarking this new and cute journey of our lives.

One close friend Manish Malhotra was at the wedding. Urmila’s sis, Mamta was the planner of wedding, and she manages it all well. Her residence on Bandra was decorated in adorable lights. The mandap was on the terrace. Though it was a Hindu wedding, later they had a fascinate nikaah ceremony.

Mir’s family came from Kashmir a month before the marriage to fix all dates.The Bribe was looking cute and ravishing in golden lehenga designed by their best designer Manish. Her jewelry was stunning. Mohsin Mir was also decked up in a kurta and a white pajama.

According to Mumbai Mirror, Urmila and Mirr threw a lavish party for their good friends on 2 March 2016. The pair stays together in Urmila’s house.

Urmila and Mir gave a grand reception party where Urmila was sparkling in stunning gold and white ensemble, and Mir was looking hot in a black suit.

It is rumored that Ram Gopal Verma has a secret crush on Urmila. He once wrote Urmila a type of letter in which he adds that he was hypnotized by her beauty. He wished the duo a “Rangeela” married life.

Mohsin and Urmila have just completed four years of their Wedding. Urmila Matondkar And Mohsin Akhtar Mirr Lovestory are as wonderful as they are. Both have shown the true bond of togetherness. And the duo looks absolutely Beautiful together. We wish them the very best for the coming years. We hope you loved the Urmila Matondkar And Mohsin Akhtar Mirr Lovestory. Comment down your views.