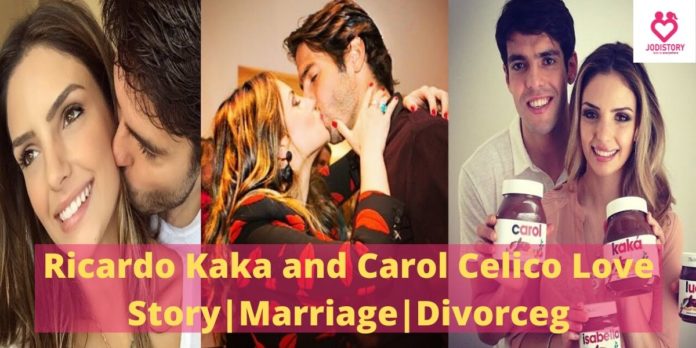 Footballers and their love stories are just like a Bollywood film script. their love story is full of romance, love, and togetherness. This time we are here with the epic and cute love story of “Kaka”. Well, Ricardo dos Santos Leite is mostly referred as Ricardo Kaka or “Kaka”. He is one of the successful footballers. He is a Brazilian professional footballer born on April 22, 1982, in Brazil. Kaka manages the role of an attacking midfielder for Orlando City SC. Further, he also plays for the Brazilian national team at present. In 2003 Kaka joined AC Milan for 8.5 million Euros. But are you aware of his Ricardo Kaka and Carol Celico Love Story? If yes then stay tuned and join us to make your time memorable.

Ricardo Kaka and Carol Celico are the most adorable couples of football. Both shared their bond since they were in their teens. well, Ricardo is a very catholic man and he surely is not famous for being dating many women .Scroll down to know each and everything related to his love story, marriage, and Divorce.

Kaka Meets his childhood sweetheart Caroline in high school. Both become good friends. Both fell deeply in love with each other. And start dating right away. Caroline was 14 and  Ricardo was 16 when they first met.

Both were in true love and they refused to sleep together that is both were virgins before they got married. This was love from the soul. And they both showed their patience.

They both first met in 2002 when Carol was 15 and studying and Kaká is still playing for the São Paulo Football Club. Her mother met Kaka’s parents. They both were introduced to each other by their parents at a party. Soon, they exchanged phone numbers.

In Venice, he told Carol that he had to sign something, and Kaka asked her to go with him. After some time Kaka took her for dinner and on the peek of a building with a view to the whole city. Kaka then asked her to marry him. Celico said “yes” with a cute smile on her face and with tears in her eyes.

On 23 December 2005 Kaka and Caroline Celico marries at church in São Paulo. Their wedding was attended by fellow footballers from his national team.

And some close relatives international players. Both were looking stunning on wedding day. Ricardo had a formal look and carol wore an evening gown.

Caroline Celico and Kaka have 2 sons. In June 2008 Carlo gave birth to a boy, Luca Celico Leite. And in April 2011 a daughter Isabella.

Both Luca and Isabella are very close to their Kaka.

In 2014, there was a rumor that shocked the world – that Kaka and Carol were splitting. However, on 30 Dec Caroline shared a picture on Instagram that relieved fans.

But after some time in 2015, they announced their divorce through Instagram. Kaka also wrote –

“We would like to announce it publicly that, after nine years together, we have commonly agreed to divorce. Our wedding has given us two beautiful and cute children whom we love so dearly. “

“We will continue to have, the gratitude, respect, and admiration for one another remains mutually intact. We ask for your sympathy and understanding to preserve our privacy at such moment of change”.

“When a man cheats, it is a sign that his wife failed.” Carol’s words gave Kaka’s fans a hint why they divorce.

On 24 Dec 2016, Ricardo confirmed that he is recently dating the hot Brazilian model Carolina Dias on Instagram.

On the other hand, in 2016, Caroline officially confirmed that she is in a new relationship with Brazilian businessman Scarpa. Eduardo was the enemy of Kaka. So he was thrilled when he saw the picture of his former wife with him. Eduardo Scarpa appears to be very caring for Caroline.