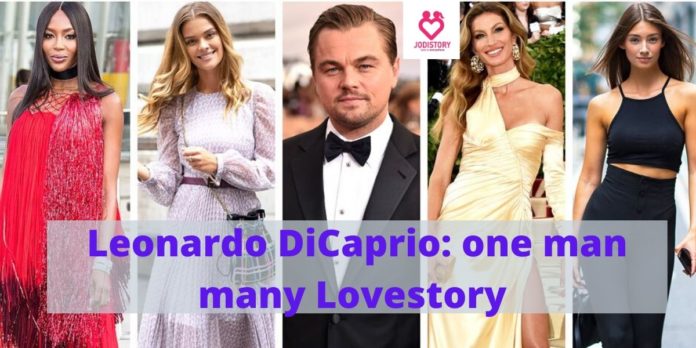 How many of you had watched Titanic? And how many times? I think almost everyone had watched it. Do you know the lead actor in Titanic? Yes it was Leonardo DiCaprio. He is an actor known for his edgy, romantic unconventional roles. In 1997, DiCaprio features in James Cameron drama Titanic, which made him famous. His more recent films include Django Unchained (2012),  Inception (2010) , The Wolf of Wall Street (2013) . Well, Leo has very fascinating love story. Are you eager to about them? then join us and scroll down to have a detailed look at Leonardo DiCaprio one man many Lovestory.

According to the reports, in 1998 of The London Sun they were in a relationship in 1994.

Moreover, Both had been spotted “canoodling around New York”. Though this relationship didn’t last for long.

In addition, Hall says to New York Magazine in 1998 that “nothing happened”.

All might have seen her in  Sweet Valley High fame. After featuring together in The Basketball Diaries in 1995 both were in love with each other.

According to The Sun, they dated off in 1994. and Daniel seduced Leonardo DiCaprio.

Before Tom Brady, Leo and Gisele were together for almost five years. Their relationship ended up in 2005.

Gisele also says – “We were just not meant to be girlfriend and boyfriend, but I respect Leo enormously, and I wish him nothing but the best,”.

Bündchen also opened up about struggling with painful attacks she says-

“No longer numbing myself with smoking, drinking, and too much work, I was becoming more and more aware of things that I’d chosen not to look at,”.

Leonardo was so serious with Bündchen . He brought her to the Oscars to accompany her. The reason was not clear why they broke up. After they split, Gisele Bündchen came in relation with Tom Brady.

Leonardo stepped up to another Secret model, Bar Refaeli. The girl who managed his passion for activism. Both dated each other from 2005-2011. They also had one serious six-month break in between.

The Sports Illustrated Bar met Leonardo at a party in Las Vegas. Though both were never been quite as serious as Leo and Gisele were.

. Bar Refaeli and Leonardo were seen at the Annual Cinema . In the year 2010, they were there for Peace Gala (Berlin International Film Festival).

Leo and Rihanna together had a flirtatious night in a Paris club. Both were rumored to be in a relationship in February 2015. Rihanna even denied saying that she was too busy to date anyone.

But she adds – “would have to be man enough to live with my schedule and not get scared.” …Leo?

The pair have never denied anything, their friendship is just a mutual agreement.

Though neither of them announces it publicly. Leo was often seen as having photographs with the pop star.

In December 2017, Leo finds her next love, Camila. Although Leonardo and Nina were still being seen on dates in May 2017. After that then-20-year-old Camila Morrone, who is a mixture of American and Argentina.

The couple has been seen shopping in LA. She also shares pic on of herself with Leo at Ko Phi Phi Le, which is an island off the coast of Thailand.

Camila was adjusting DiCaprio’s collar once. As the couple attends the UEFA football match between Liverpool FC and Paris Saint-Germain (PSG).

LoveStory of Leo is varying and is complicated. I hope you all loved the heartwarming tale of Leonardo DiCaprio: one man many Lovestory. Comment down your views and let us know how you feel about it…