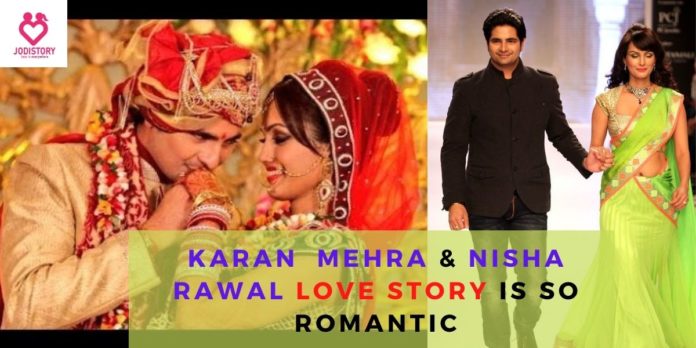 Introduction Of Karan Mehra, Karan Mehra, and Nisha Rawal’s love story Make us all believe in love at first sight. Karan Mehra and Nisha Rawal Love Story will make you believe in love at first sight. Karan Mehra was born in Jalandhar and bought up in Delhi. He is an Indian television actor and model. Mehra studied fashion designing from the National Institute of Fashion Technology. He also worked as a summer trainee at Dominos Pizza. Besides being an amazing actor he is also a fashion designer.

At the beginning of his career, he worked for directors Rajkumar Hirani and Ram Gopal Verma as an assistant in four movies. Mehra also appeared in the movie. Mehra gained popularity after playing the role of “Naitik Singhania” in “Yeh Rishta Kya Kehlata Hai”.

This young gentleman has won many awards such as Star Parivaar Award For Favourite Naya Sadasya Male and Star Parivaar Award For Favourite Yogya Jodi. He continued the know for seven and a half years but has to leave it due to health issues. From working as a summer trainee at Dominos Pizza to being one of India’s highest-paid television actor, his journey is inspirational.

He also participated in Bigg Boss Season 10. He has also been a contestant of Nach Baliye 5 and Nach Baliye Shriman v/s Shrimati with his wife Nisha Rawal.

Ms. Rawal made her first television debut by performing her role phenomenally in Aane Wala Pal on Doordarshan. She also worked in the theatre where she featured in two different plays – Poore Chand Ki Raat and Ichha.

Karan and Nisha met on the sets of the movie ” Hastey Hastey” back in 2018. As Karan is a fashion designer, he was appointed as the stylist for the entire cast of the film. Karan felt for Nisha in the first meeting itself. It was like love at first sight for him.

As they kept on meeting each other on the sets, they became close friends with time. Nisha didn’t fell for him instantly but with time she also fell for him. Karan Mehra and Nisha Rawal Love Story began.

Surely, it’ll leave you in awe. Karan also stated in an interview, Nisha is his first love. He had never dated anyone before her.

When Karan was asked in an interview what attracted him to Nisha, he answered “Nisha is a beautiful soul. She understands me totally and is a perfect life partner. She is a driving force in my life and tries to keep a positive attitude in me, even under stress”.

When Nisha was asked the same question, she answered ” Karan is a much-disciplined guy and has all the qualities of a dream man. He is also very caring by nature. We complement each other”.

When the two began dating, Nisha was already a popular face. Karan Mehra was a struggling artist in the industry. Nisha stood by him during his struggling phase. Karan also mentioned once “In fact, he even revealed that she fought for him if and when she heard people talking about them in and around the set.

This is when I realized that she was the one”. Karan even told Nisha that he plans to marry her someday, but she laughed it off, initially. As they were deeply in love with each other, they met each other’s parents. Both of their families liked Karan and Nisha. Karan was so introverted personality. And Nisha did not expect that he will kneel down on a knee to propose her.

But surprisingly, He went down on his knees. popped the question and, of course, she said yes! The best part of Karan’s proposal was that he made sure that both their families were present to witness the most memorable moment of their life. The couple then danced to their favorite song ‘Pehla Nasha’ and everybody around couldn’t stop gushing over them.

Even after the proposal, the couple dated for almost five years, since they wanted to give their relationship some time and wanted to get to know each other better.

The couple tied the knot on November 24, 2012. Their wedding included many ceremonies. Although they had a lavish wedding, yet only close friends were present. Their wedding took place at Karan’s Noida residence. It was a five-day-long celebration.

When Karan was asked about marriage preparations, he answered ” “I have realized one thing, getting married on-screen is easier than off it. A lot of preparations and planning go into it.”

Soon, the couple declared Nisha’s pregnancy on their social media and turned fans crazy. They were blessed with a baby boy. The couple named their son as Kavish, a mixture of Karan and Nisha. Karan announced the baby’s birth via Instagram.

He posted an adorable picture of his son’s tiny feet and captioned it as ”The littlest feet make the biggest footprint in our hearts, this is something cannot be expressed in just words.

We are ready for this journey with our little blessing that has arrived in the form of a beautiful baby boy”.Since then, both are enjoying and experiencing parenthood.

Karan and Nisha’s universe, Kavish Mehra turned two on June 24, 2019. The parents decked up the entire room with red and black balloons and also got a designer cake for the birthday boy. It looks like Kavish is a big fan of cars and so Karan and Nisha got him a car-themed birthday cake.

They celebrated their little munchkin’s birthday in an adorable manner. The couple also posted pictures of this special day on their Instagram profiles and left everyone in aww. The couple together makes life worth living. Karan, Nisha, and Kavish are more than happy with each other. They see their entire world in each other.