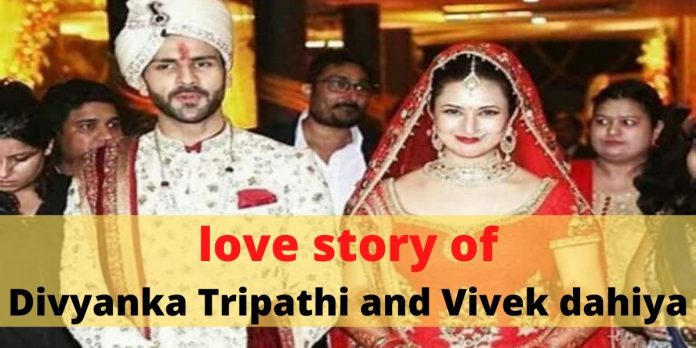 Are you the one who always got confused between the debate of Love marriage vs Arrange married??. This story is going to clear all your confusions. Divyanka Tripathi and Vivek Dahiya love story is an example and proof that love is love.

It doesn’t come with love or arrange marriage. If someone meant to be together. They gonna be together no matter what happens. Destiny will find it’s own way to give that love to you.

Divyanka is from Bhopal who entered the world of TV through the talent hunt show ‘ India’s Best cinestars ki khoj’. She became an household name in the country with her very first show “ Banu mai Teri dulhan” .

Divyanka got more fame in the show “ ye hai mohbattien” in which she is right now. Where as her husband Mrs. Vivek Dahiya is from Chandigarh who worked in IT park , Chandigarh.

In 2011, after wining the title of Mr. Chandigarh. He decided to take up career in acting and moved to Mumbai. Vivek entered in Divyanka’s life through the show “ ye hai mohabbtein”.

Divyanka met the first love of her life in her first show ” Banu mai teri dulhan”. She falls in love with her co-star Sharad Malhotra.

The couple was together for nine years and everyone was speculating marriage announcement in sometime 2015. They call it quits in January 2015. This left Divyanka with a broken heart

Divyanka didn’t let her heartbreak to hurt her career and reached to heights of success through the show ‘ ye hai mohabbtein” and became “ Ishita “ for her thousands of fans in the country.

In an interview, she revealed her views on marriage: “I am open to everything right now, love or arrange. There should be equal reciprocation of love and warmth from him. No more one-sided love”.

The broken heart of Divyanka was meant to be mend. She didn’t know that she will find her soulmate in her co-worker Vivek Dahiya.

She met him on the sets of the show “ ye hai Mohabbatein”. They hardly talked to each other. In an interview, Divyanka revealed:

It’s time for destiny to send a cupid between them to make them fall for each other. Guess, who was the cupid??. He was Pankaj Bhatia, one of the co-workers of Divyanka and Vivek.

Pankaj played his role as professor Bala Chandran on the show. And introduced them as he thought that they have common traits.

Yes, Divyanka and Vivek had what we call an Arrange-cum-love match. They started looking at each other from a life partner’s perspective.

After Divyanka’s breakup with Sharad Malhotra. Her parents were looking for an ideal match. The same case was with Vivek. And they fall for each other.

He proposed Divyanka on her birthday. They both went to Bengaluru to visit Divyanka’s family. Vivek sat on her knees with the ring in his hand, wearing a T-shirt.

Divyanka said in an interview that On the T-shirt, it was beautifully written that “ will you marry me” and that made me speechless.

He promised me to never hurt and keep happy throughout life. And all Divyanka have to say is “yes” as she didn’t found any words to express her feelings.

They were engaged officially on January 15, 2015, and tied knot in July. They became each other’s forever with lots of promises and expectations.

Love always prove us wrong by coming in our life in the most unexpected ways as the love story of Divyanka Tripathi and Vivek Dahiya.