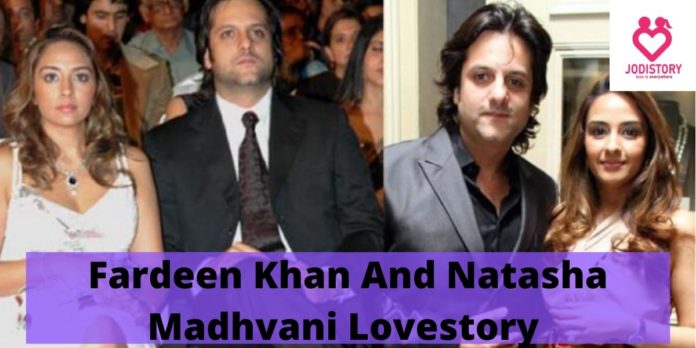 Well, Fardeen Khan doesn’t need any introduction. He is one of the finest actors in Bollywood. Khan is the receiver of a Filmfare Award and is the son of the late director, and producer Feroz Khan. His first film was Prem Aggan in which he played a lead role. This film gave him Filmfare Best Debut Award. And Khan also gained his popularity with his movie Jungle and many more. However, many know Fardeen Khan but his love life with Natasha Madhvani is a Hidden. Today we are here to discuss all about Fardeen Khan And Natasha Madhvani Lovestory. So are you excited to know all about them? If yes, then stay tuned with us we are here to make your time memorable.

Know all about When they married, How they met? Scroll down

Who is Natasha Madhvani?

Natasha is the child of ex-actress and diva Mumtaz. Her father Mayur Madhavan is a Businessmen. Madhvani was born and brought up in England. She used to live in abroad mostly.She also has a younger sister named Tanya.

Well, it is not known how they both met but how Fardeen Propesd Natasha is an awesome tale. They both were good friends and getting so close to each other.

After a short courtship, Fardeen ultimately thought of asking the question and he preferred to do it in mid-air in a Trans-Atlantic flight. The duo was traveling together from London to the USA when Fardeen conceived of getting down on his knees. It was one of the best and romantic proposals of time.

As per the reports, they both met each other through their family. Feroz Khan and Mumtaz were on-screen lovers and were extremely excited in making their children’s union a real one. However, the complete thing was a close and private affair and it was hidden when the pair actually fell in love.

The duo kept their love life and the news of their nuptials a private affair. Fardeen khan secret wedding to Natasha was a blow to many folks. But soon things came into the attention and the entire marriage episode got unfolded. It began with the sangeet ceremony followed by grand marriage and reception.

They had a private sangeet celebration on 13 December 2005, at Grand Hyatt Santa Cruz. Fardeen was looking hot in an electric blue sherwani. While on the other side, Natasha too was seen in pink and silver couture.

On 14 Dec 2005 they both tied knot with each other. Fardeen Khan wedlock combo was surely a masterpiece for its design, color scheme, and fit. He was seen in a fawn-colored high-collar kurta and Aligarh pajama. Natasha was looking adorable with a traditional chic and in a golden and red lehenga. Which was designed by Fardeen khan mother, Sundari Khan. One day after they had a lavish reception with famous guests.

Their Children and Married Life

The duo is blessed with two children, Diani Khan, and Azarius Khan. Fardeen Khan and Natasha are a motivation to a lot of duos and are the perfect examples of love and devotion in marriage. They both have been spotted many times on vacation.

So, here is the end of the article. Fardeen Khan And Natasha Madhvani Lovestory is as awesome as they are. Their true Love is still in the air for the pair whose chemistry began mid-air, and they have come a long way to give wedding goals to others. We wish them all the very best for the coming years. Comment down your views.