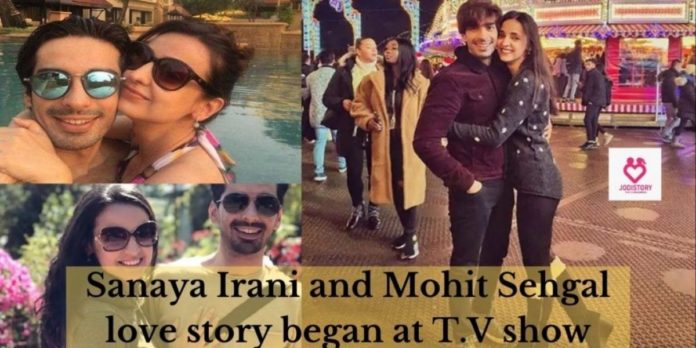 She also gained a lot of popularity for playing the character of Khushi in Iss Pyaar Ko Kya Naam Doon? and Parvati in Rangrasiya. Ms.Irani also participated in Jhalak Dikhlaja Season 8 and emerged as the first runner up of the show.

He has also hosted two shows: Zara Nachke Dikha and Meethi Choori No 1. Read ahead, to know all details about Sanaya Irani and Mohit Sehgal Love Story – a fairytale.

Where Did Sanaya Irani and Mohit Sehgal Met?

Sanaya and Mohit first met on the sets of their popular television daily soap ‘Miley Jab Hum Tum’. They were in a script briefing when Sanaya first saw Mohit. Mohit was already sitting there and was listening to the script. Director introduced both of them to each other.

They were told about their respective roles. Once the meeting ended, both of them looked at each other and burst out laughing. Sanaya said in an interview: ” Till date, we don’t know why that happened”.

Although the couple felt an instant connection in their first meet yet it took them three months to become friends. As they kept on meeting on set, they eventually fall in love with each other.


The public didn’t have any idea about real-life Sanaya Irani and Mohit Sehgal Love Story. As they were playing the role of each other’s partner on screen they decided to keep their relationship private. The moment they made it official their fans were more than happy.

As, the nation was already loving their on-screen chemistry, hearing the news of that this on-screen couple is also dating offline, everyone was on cloud nine.

After their relationship became public, Mohit gave a statement that he made the first step, he stated “. “I declared the love after the first season. Arjun Bijlani was the first to know because he always used to tease Sanaya and me saying that there is something going on between me and her… And finally, when we told him that we want to say something, he just asked us ‘what? That you guys are in love with each other?’ for which we couldn’t say anything. Because we were taken aback by his question.” LOL, poor Monaya[Mohit and Sanaya]

The Engagement Of Sanaya Irani And Mohit Sehgal:-

In December 2015 the love birds decided to turn their relationship in a forever tale. They told their parents about each other. When asked how their parents reacted, the duo answered.

They are very cool with it. They are not narrow-minded. It was not a big deal for them. They are very happy. Sweethearts got engaged at Mohit’s Residence in Delhi.

When asked about which type of wedding she wanted. Sanaya explained, “Honestly, first, we thought of doing a court marriage. Because it is a lot of stress to even plan the marriage. For the longest time, we did not get married because of this. And then our parents asked us why are we not getting married. So, then we decided, let’s just get married.

So, the plan was to keep it simple and have a court marriage. Save money and time. But then Mohit was very sweet about it. He wanted to fulfill my dream.”Mohit then added, “I just thought she shouldn’t feel that she didn’t do the beach wedding which she really wanted so let’s just do that.”

The Coolest Bachelor Party Of Sanaya Irani And Mohit Sehgal:-

Soon, the couple decided to get married in a lavish manner. The couple organized a very cool bachelors party in which all their friends were present. From Ridhi Dogra to Late Steedhar, from Daljit Kaur to Drashti Dhami every big actress attended Sanya’s cocktail party.

From Arjun Bijlani to Barun Sobti and from Akshay Dogra to Raqesh Vashishth every big actor was present in Mohit Bachelor’s party. Mohit and his friends wore T-shirts with the slogan “Last night of freedom”.

On January 24, 2016, the couple had cocktail-cum-sangeet. The function which was held at Planet Hollywood Hotel in Goa. It was a complete filmy-style party. In the party, the groom and bride along with their friends enjoyed to the fullest.

On the morning of the same day itself, there was a beach party. Sanaya, Mohit, and their friends enjoyed to the fullest.

The Dreamy Wedding Of Sanaya Irani And Mohit Sehgal:-

On January 25, the couple had a fairytale wedding. They tied the knot on the beach. The entrance to the venue was also very astonishing, there was signboard stating ” This Way To Our Happily Ever After”.

Mohit wore an orange kurta and pajama with a matching jacket. He also wore deep blue pagdi and the matching pocket square. He made a grand entrance for the wedding on a white ghodi Arjun Bijlani’s one-year-old son Ayaan became his sarbaala and sat on Ghodi with him.

Sanaya Irani wore golden lehenga with delicate embellishments, embroidery, and matching jewelry. She was looking like a queen on her big day. Her simple yet graceful look stole Mohit’s heart yet once again.

Normally, pheras take place with the partners walking behind each other. But they didn’t do that way. Sanaya and Mohit took their pheras while walking with each other.

When asked about why they did the same, the couple answered:- We consider ourselves to be equal partners in our relationship with no one being better than the other. The couple went According to  Greece for their honeymoon, the country of love.

Love Birds Sanaya Irani And Mohit Sehgal In Nach Baliye, Happily Ever After:-

The love birds make us all believe that if two people genuinely love each other, the relationship never falls no matter for how long you date.

This couple shows that opposite attracts. Sanaya is a bubbly girl and Mohit Sehgal is shy by nature. Yet they are deeply in love with each other. We always hear that nothing is perfect. But by seeing this couple. The World often believes that perfection do exist.