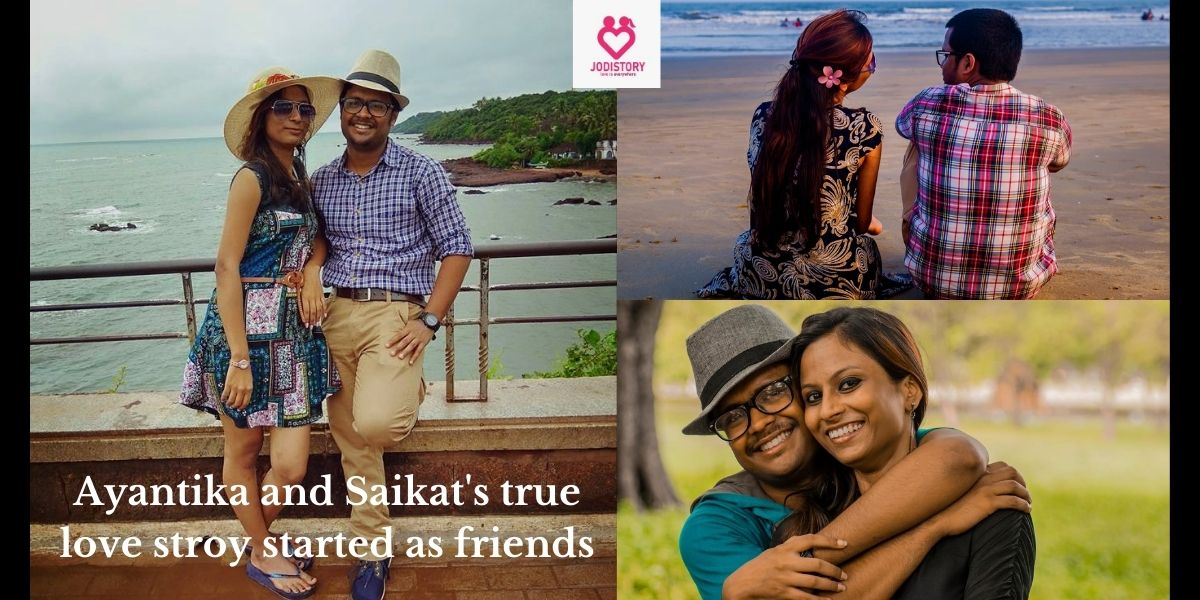 In the 21st century, the concept of true love is somewhere is lost. Everybody feels that true love is a myth. Especially the youth has leaned towards casual dating. But, still, there are some people who believe in true love and carry it with them. You should consider yourself lucky if you have that true love in your life. Not many are fortunate to have someone so special in their life. So, let’s read a true romantic true love story of a real couple of India.

But before that don’t you guys want to share your love stories with me? I am very eager to know everything about it. It must be as beautiful as a fairytale. So, please let me know about your love story and contact me. Now let’s read Ayantika Mondal and Saikat Banerjee’s romantic love story.

In today’s world, most of us meet each other on social media. Either we swipe right someone or we ping someone. But Ayantika and Saikat’s short love story is authentic in that way. They both first met each other at the English tuition batch.

Most of us just don’t take tuition batches so seriously. We do not hope that something romantic could happen there. From the very first we all friend zone each other. But Saikat and Ayantika’s destiny was different from that. But, as we know the road of love has difficulties and distractions.

If you are thinking that the beginning is very smooth, you are mistaking. There was a third wheel. What happened next? Come and read the true love story of this couple.

Saikat and Ayantika became good friends at the tuition batch. Naturally, there was some kind of liking. But things were not very easy. Ayantika thought Saikat liked her but then Saikat just dropped a bomb. Want to know what did Saikat say to her?

One evening at the tuition batch, Saikat was talking to Ayantika generally. And all of a sudden he expressed his feelings to her. He said that he finds one of Ayantika’s best friends very attractive. It was quite a shock for Ayantika.

Saikat’s revelation definitely gave a shock to Ayantika. But she did not express it. Maybe she felt she would lose him as a friend. She just listened to him and advised him to do the right thing.

How did Saikat and Ayantika get together?

What do you think this is the end of a brewing relationship? The answer is no.

Destiny definitely had plans for Ayantika and Saikat. The girl whom Saikat liked already had a boyfriend. But there was still no sign of Ayantika and Saikat being together. As they both considered each other as really good friends.

They continued to be friends and had a very normal relationship. But something definitely was there between the two. They both liked each other very much and would spend time together. So, let’s find out who initiated the move? Was it Ayantika or Saikat?

Saikat proposed Ayantika very surprisingly – What was the answer?

Things were going normally between the two. But one day at the tuition batch all of a sudden Saikat proposed Ayantika. He asked Ayantika “Tui amak biye korbi? (Will you marry me?)”

It was obviously a surprise to Ayantika. As the question came from nowhere. She was not expecting this to happen at all. And also the question itself was really serious and heavy. They were only teenagers who were in class 9.

But as I said there was some positive energy between the two. Ayantika was naturally surprised. But she knew what she wanted. She did not waste any time and said yes to him.

And a teenage love story started to blossom.

The new relationship between Ayantika and Saikat was going good as first. But every relationship faces challenges at first. And in this relationship, it was Ayantika’s father.

Being a brilliant student in Mathematics, Saikat would come to Ayantika’s house to help her in maths. It was also a chance for them to bond with each other. But as all protective fathers, Ayantika’s father was protective about her too.

He was not accepting the fact of Saikat being so regular to his house. It was definitely something he was not liking. It caused an argument between Ayantika and her father. But slowly her father started to accept Saikat.

Alls well that ends well – The true couple has their happiness

Saikat and Ayantika started their journey together like two teenagers who were not very mature. But with time the bud of the relationship between the two has blossomed into a beautiful flower.

The two have faced many ups and downs in their phase of the relationship. But they both stood by each other. They have supported each other in every situation and came out more strongly.

Which started as a childhood teenage love has completed 12 years of the relationship. Today both Ayantika and Saikat’s families have approved each other.

They both started off together like nothing. But today, Saikat is a senior geologist in Oil India Limited and Ayantika is completing her B.ed degree to become a teacher. Their families and especially Ayantika’s father is very happy about Ayantika and Saikat’s relationship.

So, this true love story of a real couple is really a delightful journey of two teenagers. And, you will be happy to know that Saikat and Ayantika are planning to get married in two years. They have been together for over a decade and are about to spend the rest of their lives together.

So, my lovely readers did you like the true love story of a real couple who chose to stay with each other very early of their lives but still is continuing their promise? If you liked this story please let me know in the comments section. And do not forget to tell me your wonderful love story.