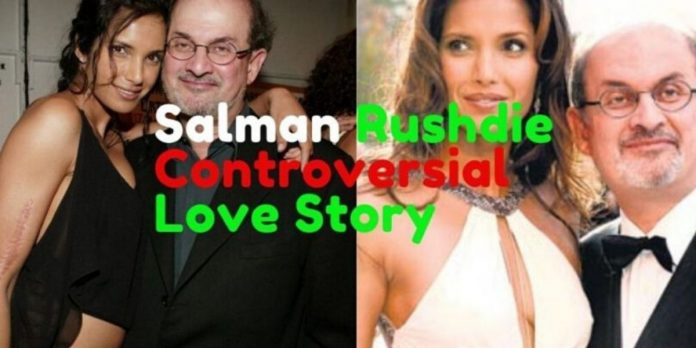 Being a world-famous writer Salman Rushdie is also famous in his love life. After writing so many famous novels like MIDNIGHT CHILDREN, THE SATANIC VERSES, THE GOLDEN HOUSE, etc. Salman created controversy in his life by writing the first novel THE SATANIC VERSES. Likewise, Salman has welcomed controversy in love life also. He married and divorced four times. Salman Rushdie controversial love story is given below.

Being an Indian-British writer Salman popped name in the writing world. So without wasting much time on Salman Rushdie. Let’s have a romantic look on his love life.

How Many Women Salman Rushdie romanced?

Above and all Salman met so many women in his celebrated career. But neither he became a true lover. Nor he got true love till now. At the very beginning of his career, Salman met his first love.

Salman met Clarissa in 1960. The pair met at a pop concert. Clarissa was a senior literature officer at Art Council. Somewhere there is Clarissa behind Salman’s success. The pair married in 1977. But unfortunately, the marriage did not go for long. The happy couple took divorce in 1987. But Salman did not leave Clarissa even after divorce. They were living as a friend. In fact, Salman lived with her as a friend until her last breath. She died with cancer in 1999.

Marianne is also a famed writer as Salman Rushdie. Being a PULITZER finalist and American famous author Marianne entered Salman’s life. The duo fell in love because they are authors. After marrying in 1988 the pair was living happily. But unfortunately, after Khomeini’s fatwa against Salman, for his novel THE SATANIC VERSES. The pair had to hide underground for some time. And then in 1993, Salman took divorce from his second wife.

Above was the love stories of Salman’s two wives. After caught in fatwa Salman became famous also. Because fatwa brought controversies. And controversies drag readers to Salman’s novels. By the way, Salman could not stop his heart beating. He fell in love again and again. Here is Salman Rushdie controversial love story.

Elizabeth West was a book editor. She became the third wife of Salman Rushdie. The couple married in 1997. In fact, the pair have a son together. But the pair separated in 2004. They took divorce in 2004.

Padma Lakshmi is a model turned chef host. She came in contact with Salman Rushdie when she was only 28years old. And at that time Salman was 51 years then. Soon an author and a model fell in love with each other. In fact, the pair married in 2004. They spent a lot of romantic moments together.

But the destiny was not in favor of Salman. The pair started living apart. Padma Lakshmi blamed Salman for divorce. In fact, the couple took a divorce in 2007. In this way, Salman did not get love in his whole life. Padma said, “Salman a sex hungry man. And he is a bad investment in her life.”