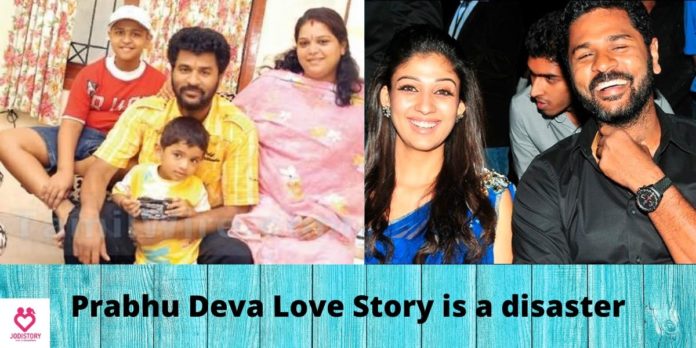 Surely, Prabhu Deva is a revered choreographer. His impeccable reputation precedes him. However, unlike his successful career, Prabhu Deva Love Story was a disaster. Very few know about his first marriage and his extra-marital affair. His first wife, Ramlath, divorced him after the stories of his affair leaked out.

How did this happen? Let’s scroll down to know more!

Prabhu Deva married Ramlathin 1995 long before he achieved stardom. The details as to their love story are not yet revealed completely. However, rumours have it that their love for dance brought them together. Maybe, cupid’s arrow hit them both in the heart and they had a love marriage.

Interestingly, Ramlath was Muslim. After marriage with Prabhu Deva, she changed her religion to Hinduism and her name to Latha.

The couple was blessed with three sons from their marriage They named them Vishal, Rishi and Raghvendra.

Unfortunately, their eldest son died in 2008 due to cancer. However, Prabhu Deva is a very caring father. He keeps his children away from the limelight. Since he entered the industry at a tender age and did not have a chance at studies, he wants his children to study well

Prabhu Deva Love Story in turmoil due to affair with Nayanthara

Around 2009, rumours of Prabhu Deva dating actress Nayanthara started floating. Prabhu Deva had directed her in his Tamil movie, Villu.

When asked about the rumours, the duo would simply laugh off. However, in 2010, Prabhu Deva confessed that the rumours are true. He’s in love with Nayanthara and would love to marry her.

Of course, the rumours did reach his wife’s ears and it caused turmoil in their marriage. When Prabhu Deva sought a divorce but his wife held firm. She even filed a petition in the court accusing her husband to ruin his family financially due to his extra-marital affair. She also requested the court to restrict his marriage with Nayanthara.

This led to several protests both by his wife as well as the women NGO’s. On July 2, 2010, the couple was finally divorced. Latha got the custody of their children and Prabhu won the visiting rights.

Prabhu Deva and Nayanthara moved in a live-in relationship.

After his divorce, things should have been easier for Prabhu and Nayanthara but fate had other plans. Nayanthara had already quit films and was dependent on her lover for finances. She had an expensive lifestyle which landed Prabhu Deva in debts.

Things did not turn out well for the couple. Eventually, in 2012, the couple revealed their break-up.

Despite the turmoil in his personal life, Prabhu Deva has done well with his career. He as a choreographer, director and producer has gained recognition. Prabhu Deva, Nayanthara and Ramlath have moved on in their life. No wonder, his love story is roller-coaster ride!