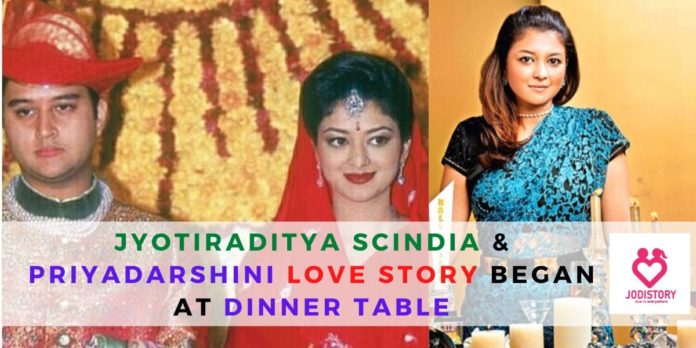 Who is Priyadarsini Raje Scindia?

Before direct landing on Jyotiraditya Scindia & Priyadarshini love story. Let us know the little bit biography of Priyadarshini. She belongs to the Royal family of Baroda- Kumar Sangramsinh Gaekwad.

Priyadarshini was born in Gujarat. Her mother belonged to the Rana Dynasty of Nepal. She has completed her education from Mumbai.

Priyadarshini also won the title to miss beautiful. She has been part of “India’s 50most beautiful women” in 2012.

On that day Priyadarshini was looking extremely gorgeous. And it was love at first sight for Jyotiraditya Scindia. He fell in love with her beauty. Although the dating was arranged by the parents.

But the decision for marriage and the further relationship totally depended upon Jyotiraditya Scindia & Priyadarshini Raje. They had to make the decision about personal life as well.

In the end, the couple decided to marry each other. But they wanted to know each other before marriage. That is why Jyotiraditya & Priyadarshini asked for time from parents.

After spending three years’ time together with each other as a friend and a loving couple. Jyotiraditya Scindia & Priyadarshini Raje tied a marriage knot in 1994. And they became life partners forever.

Why Jyotiraditya Scindia joined congress at an early age?

Although Jyotiraditya Scindia was very young when he joined politics. He was only 26 years old when he won the election and the place of his father Srimant Madhavrao Scindia.

2001 accident changed the life of Jyotiraditya Scindia. In the plane accident, he lost his father Madhavrao Scindia. He died at the age of 56years. Sr. Scindia was recognized as “people’s Prince”.

Although politics was in the blood Jyotiraditya Scindia. That is why to save political identity he had to join politics at a very early age. Now he has become a famous and favorite leader in India.