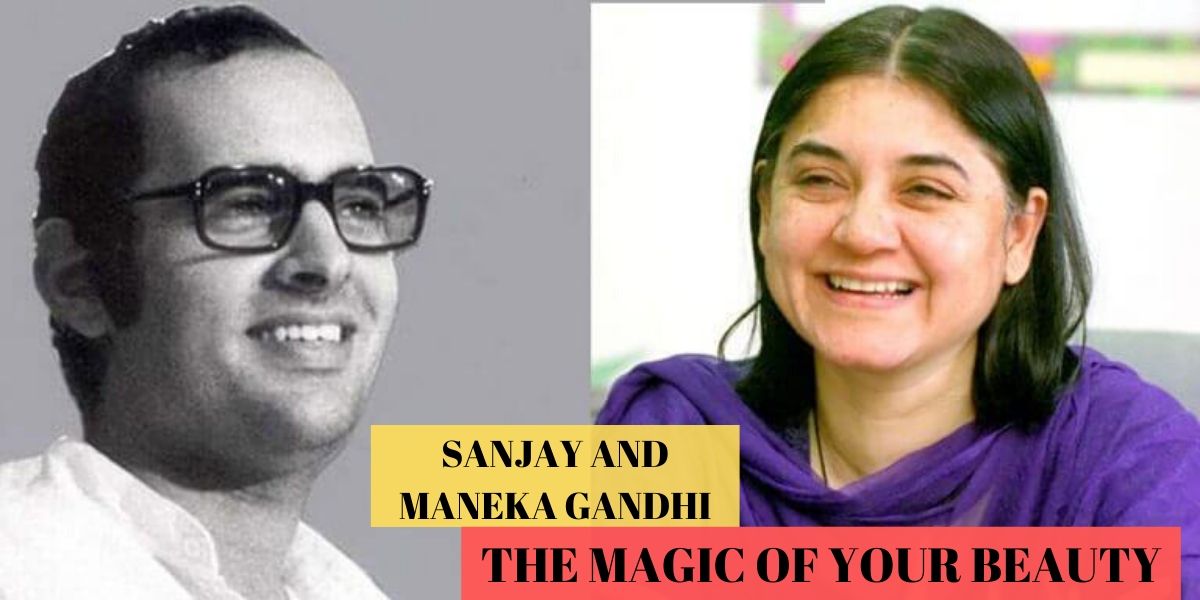 When we think of love stories, the story of the Gandhi- Nehru family does cross our mind. This family has seen many love affairs turn into beautiful weddings. Today let’s unravel the Sanjay gandhi & Menka gandhi love story.

Sanjay Gandhi was an important political figure and a descendant of former Prime Minister- INDIRA GANDHI.

While he was trying to make his career in the automobile industry. He didn’t know that some lady would leave a mark on his heart. And not just a mark, an impression.

Sanjay first saw Maneka in an advertisement for Bombay Dyeing. And he was instantly attracted to her.

That first look of her sure cast a beautiful spell in Sanjay Gandhi and he couldn’t stay but meet her. He was just drawn towards her.

As for Maneka she was only 17 years old, when she first met Sanjay in the year 1973. She was just an upcoming model.

They met at a cocktail party which was organised on the happy occasion of Veenu Kapur’s marriage. Veenu was Maneka’s cousin and Sanjay’s old classmate.

Veenu being the common link, God used him to get this beautiful couple together.

When Maneka and Sanjay interacted at the party, they felt a strange connection.

Something that was keeping them together, pulling them closer. They spent the entire evening talking to each other and knowing about each other.

It was evident, they both had developed a certain liking for each other. When the party ended they, promised each other to meet again on the following day.

And slowly these meetings changed into sweet moments and memories. As time passed the couple grew fonder and fonder of each other.

And this is how their love story begun. Sanjay being shy by nature, always planned his meetings with Maneka either at his residency or hers.

And when Sanjay was admitted in the hospital, Menka used to visit him every evening. She didn’t miss a day.

After a year of courtship this couple tied the knot and was forever bound in love. And for this couple forever meant FOREVER.

That is why even when Sanjay Gandhi died in a plane crash, Maneka Gandhi didn’t marry again.

She lived alone with her son Varun. Such was the love they shared. They truly believed that they were irreplaceable form their partners life.

They just show that you can find love in simple things as well.