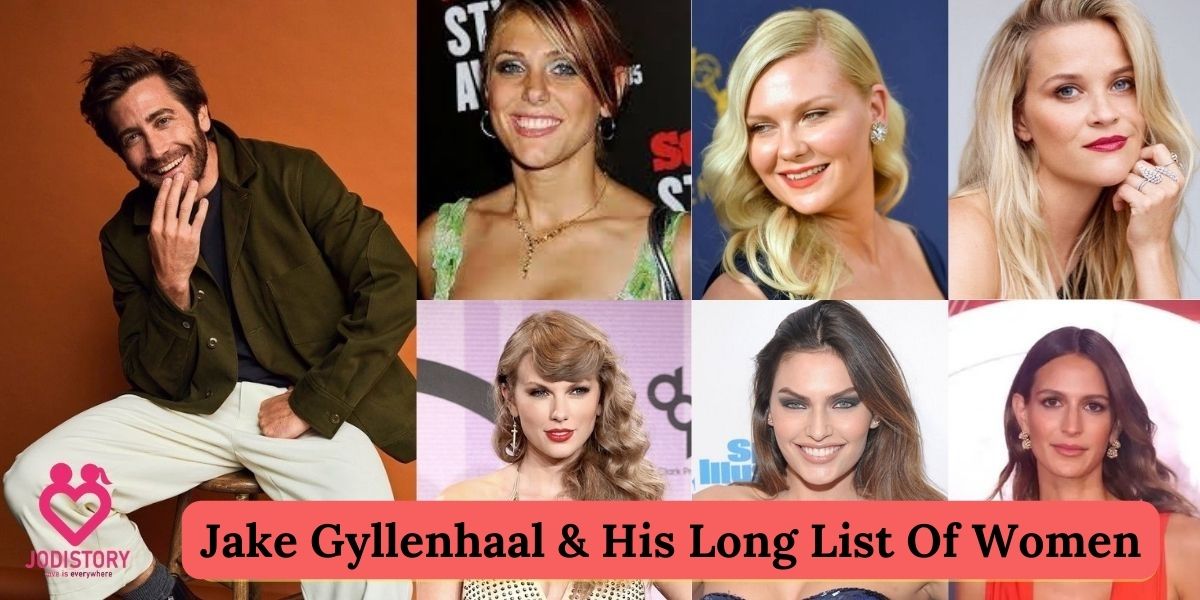 Jake Gyllenhaal is one of the most successful and talented American actors in Hollywood. Without any doubt, his good looks too instantly act as a magnet for young ladies. Probably that’s why Jake Gyllenhaal’s love story & relationship has a long list of women!

Yes, you read it right! The actor has dated many ladies. I’m sure you’ll want to know which leading ladies of Hollywood were romantically involved with Jake Gyllenhaal.

Jake Gyllenhaal has starred and delivered a splendid performance in many movies. Some of them are Prisoners, Brokeback Mountain, Love & Other Drugs, Nightcrawler, Nocturnal Animals, etc.

Now we should move on and dive deep into knowing Jake Gyllenhaal’s love story and his long list of women. Surely, you’ll understand why he dated so many women after this article.

Jake Gyllenhaal dated singer and songwriter, Jenny Lewis, of an Indie Rock Band, Rilo Kelly. She was his first girlfriend in the industry. They briefly dated in 2011. However, they still grabbed too much media coverage for a relationship that was so brief. They broke up within months but stayed good friends.

The controversy ignited in 2011 again when Jake took Jenny Lewis to Golden Globes as his date after breaking up with Take Swift. Taylor’s army didn’t take this lightly. Moreover, they speculated that Jake left Taylor Swift for Jenny Lewis!

Jenny, then herself came out to clear the air. She told everyone that there was no drama brewing in her life. Basically, she just went with Jake as his friend and nothing more.

Jake Gyllenhaal broke up with his second girlfriend Kirsten Dunst

Maggie Gyllenhaal, Jake’s sister was starring with Kirsten Dunst in the movie, Mona Lisa Smile. This is how Jake met Kirsten Dunst. They dated from 2002-2004. Undoubtedly, they were a very young and volatile couple. Since the couple was very young they were in no hurry to get married.

The couple even adopted a dog together. They split up soon because they had very different lifestyles. Jake liked to stay at home but Kirsten was an out-of-town girl.

One time she ordered a salad and ate with a fork. Somehow it really irked Jake and he got disgusted. They parted ways and Jake took their dog with him. The couple did not end the relationship on a friendly note.

This dynamic Hollywood couple made constant headlines. They met on sets of a movie Rendition but kept their feelings lowkey. Apparently, both of them had a crush on each other. They even started dating each other.

Jake really wanted to marry Reese and have all of her but that’s where the reality hit them. Reese had just separated from her ex-husband, Ryan Phillipe with whom she shared two kids. Of course, she wasn’t ready to jump into marriage again with a guy she just met.

She needed a break and time to heal. Above that, she got cold feet. According to her Jake wasn’t very committing either. He has a good relationship with her kids but she didn’t see it going anywhere.

However, Jake still respects and adores Reese Witherspoon, which shows he was really in love with her.

I bet you must have all heard Taylor’s All Too Well on repeat a hundred times now. Taylor didn’t shy away from revealing all the dirty secrets of her relationship with Jake Gyllenhaal in this song.

It was clear to everyone that Jake played with her innocent heart especially when he could have avoided that. She was just a young girl completely in love with an older man. The Red Scarf Controversy lives on to date.

On numerous occasions, Taylor has revealed that she left her red scarf at Jake’s sister’s house. The actor has been attacked multiple times because of that. He became the national villain because of Taylor’s song.

Jake has stated that he could feel the age difference with Taylor. He was also upset by all the media attention they were grabbing. So he just decided to break up with Taylor Swift.

She was very heartbroken because he started dating her when she was younger. But in the end, that’s what broke them apart.

Alyssa Miller, a Sports Illustrated Swimsuit model got involved with Jake Gyllenhaal. They dated for a couple of months. They were a very touchy-feely couple. Moreover, they were seen stealing kisses in public many times.

Things started crumbling between them when Jake went away for his movie. That’s when their long-distance relationship started. The model couldn’t tolerate the distance with Jake gone.

So the relationship and their feelings just mutually fizzled out. However, Alyssa still remembers how Jake taught her to cook a few dishes.

Jake and Jeanne have a very private relationship. Jeanne doesn’t like the spotlight a lot. So for Jake, it’s one of the reasons why he adores her. As per sources, the couple started dating in 2018.

Jeanne is about fifteen years younger than Jake Gyllenhaal. She is a french model. On numerous occasions, Jake has seen complimenting the love of his life. He has never failed to say that Jeanne makes him feel at ease. Jake has finally found a relationship where he has both love and support.

The couple likes to take things slow and easy. Jeanne is very comfortable with Jake’s family. Also, Jake’s family seems to adore her. Jake Gyllenhaal’s relationship gives us a couple goals. Is not it?

What happened between Jake and Taylor?

Jake and Taylor broke up.

How long ago did Taylor Swift date, Jake Gyllenhaal?

Who was Jake Gyllenhaal’s first love?

Jenny Lewis is the first love of Jake Gyllenhaal.

Jake and Natalie briefly dated in 2006.

Who are Jake Gyllenhaal’s girlfriends?

Why did Reese break up with Jake?

Reese could not commit to Jake.

Thoughts on Jake Gyllenhaal’s love story & relationship with many women

Jake Gyllenhaal’s love story & relationship gives us a reality check on love. It teaches us that not every relationship is going to be the same. Sometimes, one has to go through many good or bad experiences in life to find true love.

Also, not all of your exes will feel the same about you at the end of the day. That is a harsh pill to swallow but you cannot be nice to everyone. True love will definitely knock on your door when the time is right. So never lose hope.