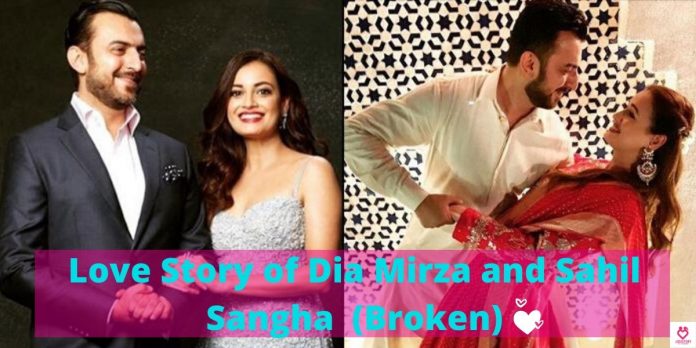 All wants to have a perfect and romantic love story, but do ideal love stories really exist? Some though prove it. We are here to know the engrossing Love Story of Dia Mirza And Sahil Sangha

The charming and hot Hyderabadi princess of Bollywood, Dia Mirza married Sahil Sangha in Delhi. The standard couple had to postpone their wedding twice. Just because of the ill health of their family members.

Wondering how they met? join us and don’t go anywhere we are here to make your time memorable.

Know why they decided to separate after five years of a pleasurable life.

Their very first meeting was officially focused on business discussion> And that was conducted by Vikram Phadnis.

Vikram and Sahil worked together on Salaam-e-Ishq Both met firstly when Sahil Sangha went to Dia mirza house for telling the script of a film.

Though they were connected with each other since 2009.

It was a standard case of love at once. Sangha and Dia altogether own a company of film production called Born Free Entertainment.

In 2014 Sahil proposed Dia Mirza. Both were in New York to attend an award function. Sahil bows down on his knees and presents the ring.

All this scene was in the middle of the Brooklyn Bridge. Dia being in love accepted this heart-warming proposal.

And the cute pair was praised with best wishes by all tourists present there.

How Love Story of Dia Mirza and Sahil Sangha turned into grand wedding?

After much confusion caused by work commitments and family. On October 18, 2014, their wedding finally took place in New Delhi’s in Chattarpur farm Dia looked stunning like a queen in a beige with green sharara designed by superstar couturier Ritu Kumar.

On the other hand, Sahil dressed with a Raghavendra Rathore creation – an achkan a glamorous white color in silk linen.

Post-wedding Reception And Beyond

After the wedding, it was time for the reception. And for this special occasion, Dia mirza was looking as hot as she is. She wore gold of Shantanu and Nikhil lehenga.

Nikhil and Shantanu even tweeted telling about Dia’s look in their creation.

Both had a romantic honeymoon. They both decided to take their honeymoon in starting 2015, a new beginning of sorts.

Dia Mirza and husband Sahil Divorce after 5 years of marriage

Sahil Sangha and wife Dia mirza have declared separation after 5 years of marriage. Dia Mirza, who had married Sahil Sangha in October 2014 took to social media to make an important announcement.

The actress of Rehnaa Hai Terre Dil Mein expresses that they are still friends and no other controversy with Sahil.

The Dai Mirza revealed that it is their mutual decision. And both of them still have love and respect for each other.

Dia and Sahil Both Shared the message :

“We thank our family and our friends for all their love and understanding and members of the media for their continued support and request everyone to respect our need for privacy at this time. We will not be commenting any further on this matter,”.

Hope you all loved the engrossing Love Story of Dia Mirza And Sahil Sangha.