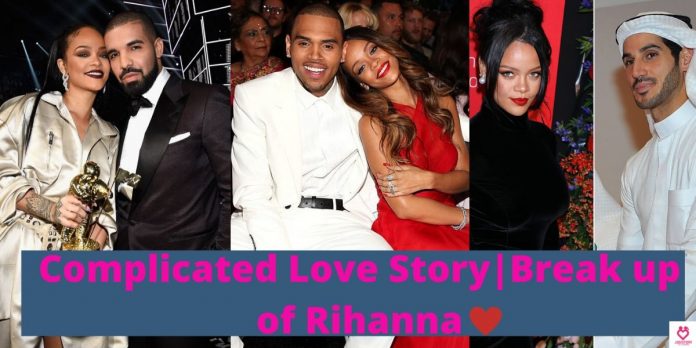 Who doesn’t Know Rihana? The versatile and hot singer in the world. Everyone might be agreeing that Rihanna is the queen of all things. In the past few years, Rihana is the richest and most popular female singer in the world. And had built a huge business empire. Not to wonder that some want to be with her, and others want to be of her. Though while making ample success, she still has time for dating. Her relationships are fascinating and with great number of controversies. Join us to Know about the men she has been obsessed with. And to know the complicated love story and breakup of Rihanna

Chris Brown has disclosed how Rihanna first confessed him. Chris and Rihana met each other in 2005. It was time when they were starting the music industry.

Rihana was 16 and Chris was 17 years old, Rihana introduced Chris at the Vibe Awards.

After that event, they started hanging out. Then in 2006 photos of them started popping up in the media.

But According to them both were just good friends. Though the relationship between them was not hidden for a long time.

After this, in 2008 they both were spotted in Grammy Awards Which clarified their ongoing love. They were just like couples and were flirty all the time.

Breakup and Patch up with Chris Brown

According to reports, Chris Brown told Rihanna to not wearing revealing outfits as it will attract too many male folks. And it was obvious this happens if you date one sexiest woman in the world.

Chris was on $50k bail as he was in prison for physical harassment of Rihana. And was in Third-degree treatment by accepting 180 hours service.

Even, after all, this Rihana was not able to live without Chris and soon they were again in limelights.

The complicated love story and the breakup of Rihanna includes many other cases. Drake met Rihanna in Toronto. When she was shooting for “Pon De Replay” at a restaurant. She was introduced to Drake as a person who “played background music at the small restaurant in front of people during their dinner.”

Recently after Rihanna’s very controversial split from Chris Brown. Drake and Rihana had a first date after Chris assault the singer.

Page Six reported that Rihanna and Drake were seen at Lucky Strike in New York City.

Some folks told that Rihanna was with Drake all night.

But this relationship doesn’t work for long and in October 2016 Drake and Rihana Broke up. In the interview with Vogue in 2018, she said that she doesn’t like too many compliments.

The bond between Rihanna and Scott rumored in September 2015. After the couple dropped ‘Woo’, a track of Rihanna’s ‘ANTI’.

The social media was full of photos of the pair. They were becoming personal in a club.

In 2015 during New York Fashion week the two were seen getting flirty around the city.

Rihanna and Leonardo DiCaprio had a short relationship

They enjoyed together at the Playboy mansion in 2015. And might have kissed also . According to reports, they were  “hooking up for years.”

. They celebrated Valentine’s Day together in 2015 .

And sharing of photos on the internet with hashtag Rih-Caprio were shared.

In June 2017, pics on the social media of the music superstar Rihana have seen The pics include some serious PDA with a “mystery man”.And that was later Jameel only in Spain.

Later in that month, the rumored couple was spotted having coffee together in Ibiza. In July, According to  Us Weekly that they had already been “hooking up for months.”

Jameel and Rihana Spotted together

In August 2017, the pair attempted paparazzi in London behind an umbrella

After a month, both celebrated Halloween in Boston. And had dinner and played bowling with friends.

Their Bond continues into the new year. Both joined Grammys together after-party in 2018 at New York.

Rihana also confirmed that she is in love with Jameel.