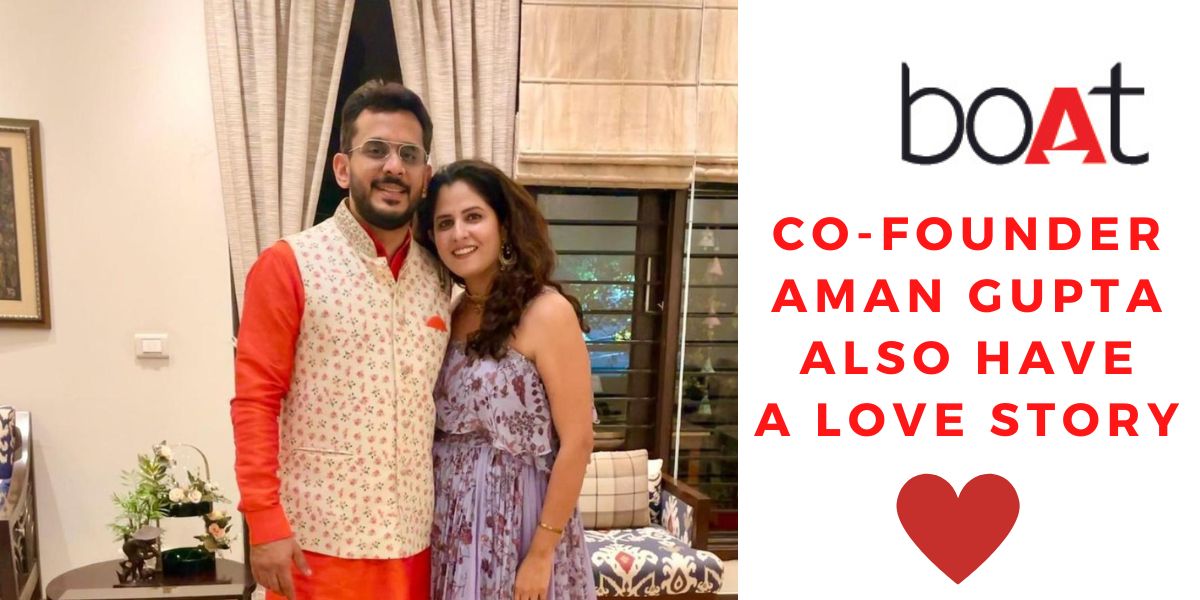 When we think of a CEO or founder of a brand we think of a business-minded, smart & practical person. That’s the first thought that jumps into our minds. I know you must have used Boat earphone or heard about it. Have you ever thought that Boat Co-founder do have a love story? Yes CEOs do have feelings. They do fall in love. Have a look at Aman Gupta Boat Co-Founder Love Story.

I mean just look at Aman Gupta. Yes, I am talking about one of our favorites, Aman Gupta, a shark from the famous show The Shark Tank India.

We all know him and his funny and enjoyable nature. He is a perfect example of a CEO with humor.

Who is Aman Gupta?

Aman Gupta (born on 04 March 1982) is a shark from “The Shark Tank India“. He is the CEO & Co-founder of an India-based consumer electronics brand, BoAt. Aman is known for his entrepreneurial spirit and business acumen, having co-founded Boat and successfully grown the company into a leading player in its industry.

All about Aman Gupta the loved Shark at “Shark Tank India”

Aman Gupta is a boy from New Delhi. He was born on March 4, 1982. He completed his schooling at Delhi Public School in New Delhi. Then he went to Shaheed Bhagat Singh College for pursuing a bachelor’s degree in Commerce.

Who is Aman Gupta IAS wife?

Priya Dagra who appeared with Aman Gupta at The Kapil Sharma show is wife of Aman Gupta. She is from Delhi.

How many kids Aman Gupta have?

Who is Priya Dagar?

Priya Dagra is an Indian woman best known for being wife of Aman Gupta, CEO & Co-founder of Boat.

Who is Aman Gupta?

Aman Gupta is Co-founder & CEO of Boat. He is also famous for being a shark at the show The Shark Tank India season 1 & 2.

Boat Co-founder Aman Gupta married to his college crush Priya Dagra. We have seen many love stories in our college days. But many of them fail. Very few love stories achieve a success of marriage & Aman & Priya are one of those lucky couple. Aman Gupta tied knot with Priya Dagra in the year 2008.

Priya Dagra is best known for being the wife of Aman Gupta, the Co-founder and Chief Marketing Officer (CMO) at the boat.
They appeared together in the Kapil Sharma show for the promotion of “The Shark Tank India” Season 2.

Priya Dagra is basically from Delhi. She was born on October 23. She has completed her education at St. Anthony School.

Aman Gupta & Priya Dagra are happily married. He is blessed with two beautiful daughters – Miraya & Adaa Gupta. They are a happy complete family of four now.

Aman Gupta, Boat Co-Founder, Love Story is a perfect reply to all those who say you have to choose one between love and career. You can’t carry both together.

But according to Aman Gupta’s love story it is clear to you that love & career can work together. You just need a supportive and understanding partner to have a balance between the two. All in all the thing that matters most is you & your partner & understanding between you two.