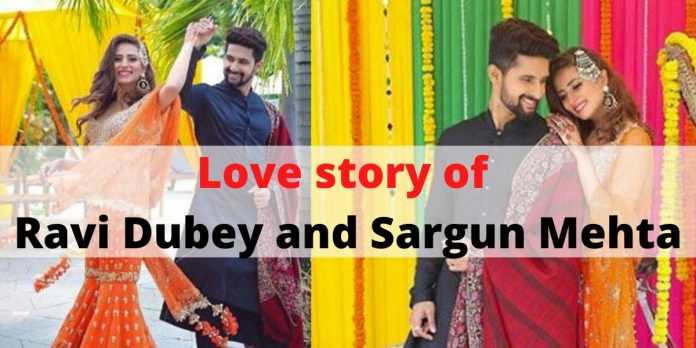 They are the two very renowned small screen stars, very popular and charming. Be it on-screen acting or real life they both have always nailed it as couples. Yes, we are talking about none other than Ravi Dubey and Sargun Mehta who have given such sensitive characters to the television industry. Sargun Mehta & Ravi Dubey love story in real life.

Let’s explore and get a sneak peek into their life. This unromantically romantic couple tied the knot on 2013, let’s be a part of their beautiful journey.

Ravi and Sadgun met each other as colleagues when they were playing opposite of each other in a serial “12/24 Karol Bagh’.

In this serial, they were supposed to play the role of husband and wife. Before this they were strangers. Initially, when Sargun saw his look test pictures she found him very weird and shabby.

But when Ravi met her in person she was blown away by his personality and aura. They both hit it off suddenly and got hitched before they can understand. They turned into lovers from colleagues. Five months after this they publicly revealed about their love.

Ravi so unromantic but love partner for Sargun

According to Sargun, Ravi is completely naive in the case of romance he is unaware of the word romance. This is the all-time complaint that Sargun has.

Ravi is an unromantic person due to which now even she has turned out to be unromantic. But as we all have seen Ravi proposing to her on the Nach Baliye sets we cannot accept that he is unromantic.

They together came as a couple in Nach Baliye. where Ravi went down on knees in the stage and proposed to her with solitaire in the presence of both the families. They invited the crew and judges of Nach Baliye to their wedding with a unique card.

Ravi Dubey and Sargun Mehta had their Mehandi function on different days and also different places.

To everyone’s shock, Ravi drove all the way from Delhi to Chandigarh just to witness the happiness on Sargun’s face. He did it to spend some quality time with her and explored their happiness together.

They had a big fat Indian wedding where they wore all ethnic and traditional dresses.

They both are giving space to each other and are growing strong day by day. Ravi helps Sargun in daily chores and has proved to be the most caring husband.

On their first anniversary, they went to Goa and Sargun gifted his bike as the disks not have any since Sargun was afraid to sit on bikes.

When people ask who is more famous among both Ravi always says Sargun’s name and he is also very proud of his wife.