The story of our Delhi Chief Minister is something we have never imagined before. Loved by all, Arvind has always been straight forward and believed in speaking what is right and isn’t scared about it. But how did his love story begin? How is he as a lover? Here you are going to read Arvind Kejriwal & Sunita Kejriwal love story.

After qualifying for Indian Revenue Service (IRS), Arvind met his soulmate Sunita at National Academy of Administration in Nagpur.

His personality is something that impressed Sunita the most.  Arvind’s commitment to honesty and his burning desire to serve the nation won the hearts of Sunita.

She had found ‘her man’. It was not just her, but Arvind also had feelings for her.

But it took time for both of them to express their feelings for each other. After a long time, they finally opened up. 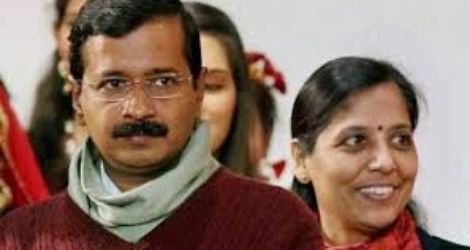 Their love story is based on true and mutual respect and understanding and the love for each other remains strong as ever.

Sunita’s family was settled in Delhi, while Aravind’s family hailed form Hisar, Haryana. There were opposition for this relationship from both the families and gave consent immediately.

The couple got engaged in August, 1994. After which they wanted to spend some time with each other and build a strong understanding.

The 2 months of courtship included movies, dates, gifts and everything else that could make their bond strong and beautiful.

In November 1994, the couple tied the knot. They were still undergoing training for IRS. After completing their course in 1995, the couple moved to Delhi.

In his eagerness to serve the nation, Arvind had resigned from the prestigious IRS service. Sunita is the sole earner of bread and butter for the family now. 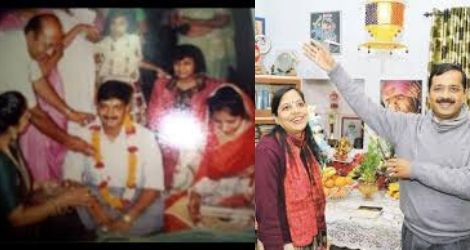 And the couple’s support for each other is something which is admirable.

The understanding between the couple is perfect. That provide freedom to Arvind to concentrate on his commitment to the society without worrying about any family issue.

Their love story is based on true and mutual respect and understanding and the love for each other remains strong as ever. Arvind Kejriwal & Sunita Kejriwal love story is awesome.

But as a woman, what we like the most about him is his public acknowledgement of his wife. On February 10, when Kejriwal and AAP’s landslide victory in Delhi elections was announced, his first pictures were that of him hugging his wife. In fact, the first picture that he tweeted post elections was one with his wife, where he thanked her for having stood by him all these years. “Thank u Sunita for always being there “, he tweeted.