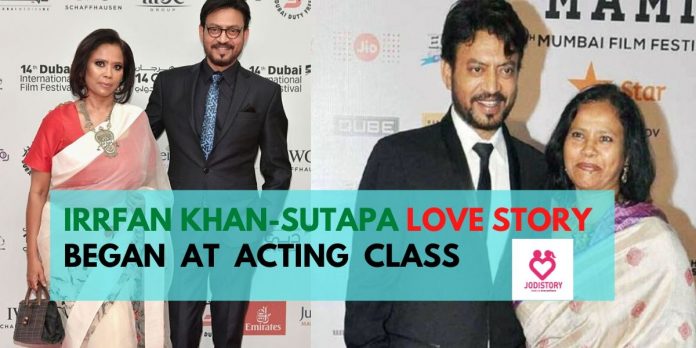 An actor known for his versatility, he has always managed to take up challenging roles and leave his fans gaga about it. Right from Salaam Bombay to Qarib Qarib Single, he has brought depth and complexity in each role that he has played. Yes, you guessed it right, we are talking about our very own, Irrfan Khan. He has managed to win hearts of many of his fans through his lead and supporting roles throughout his film life. Well we all know how his life has been throughout his film career, but let’s get a sneak-peak into his love turned married life. Here is Irrfan Khan love story.

Irrfan hails from a well-off landlord family that ran a tyre-business, however, Irrfan never had an interest in the family business and loved sports.

He even considered a career- option in sports, but stepped back when he realised that his family won’t support him.

He was doing his M.A in Jaipur, when he received a surprise scholarship from National School of Drama (NSD), New Delhi.

This marked the stepping of Irrfan Khan in the world of acting and it also happened to be the place where he met his love.

Irrfan definitely did not have any major plans about his career ahead. And he decided to give it a shot and attended the interview at NSD, New Delhi.

Which landed him in a three-year acting diploma from this well-renowned institution. Now we all know how amazingly believable actor Irrfan is.

Well the panellists also fell for him when he said that he has experience in theatres. They immediately asked him to enrol for the course and start attending classes.

During one of his class hours, Irrfan’s gaze fell at this student named Sutapa Sikdar. She was also learning acting but was keen on becoming a story and screen play writer.

He immediately managed to strike a conversation with her and over their stay at NSD, the two became good friends.  By the end of their course, the two had fallen in love with each other.

But as they were looking for employment after the program, they decided to plan about the wedding after some time. But their marriage was a rock-solid yes.

Irrfan had made his base in the acting career by 1994, and attracted quite a bit of attention. The couple decided that it was time for them to get married.

They had a simple court marriage in 1995- they had embarked on a new journey; a journey of pure support system.

Sutapa is Irrfan’s biggest critic and if she says his performance was good, he just blindly believes her. The couple has even collaborated professionally several number of occasions.

From 1993-97 for TV shows, notable of which was the sitcom Banegi Apni Baat in which Irrfan was one of the actors and his wife was the screen play writer.

In more recent times, Sutapa turned producer with Madaari staring Irrfan Khan (2015). Being his wife and a keen eye for precision of each scenario of a story.

She worked on the story of the film along with another writer for nearly a year. When she finally gained the confidence about him liking it. Sutapa approached him and Irrfan eventually liked it and agreed to work on the movie.

The couple has blessed with two sons, and Sutapa once in an interview shared that despite how serious his roles are, Irrfan is comical and fun-loving at home and with his kids.

Irrfan and Sutapa resonate a practical yet strong view about their marriage and life in general. Despite seeing some ups and downs in their life. The couple is one of the strongest couples of their decade.Irrfan Khan love story  is amazing. Is not it?