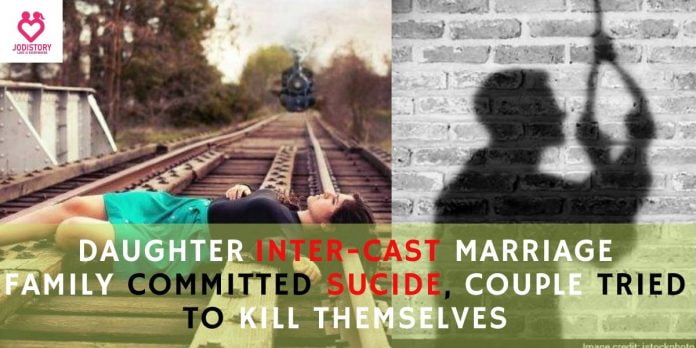 After receiving of death of a family member, the newly married couple tried to commit suicide.

Gadchiroli, Maharashtra- Parents shocked by their daughter’s decision to eloping. She married a low cast boyfriend, brother and parents committed suicide due to shame in society Gadchiroli. When the tragic news of the death of a triple family member reached to Newly married couple. The pair also tries to commit suicide by jumping in the local river according to gulfnews. But alert police rescued the couple and informed officer Shalini Ingole, Gadchiroli police station.

The newly married couple has been admitted for treatment in a nearby local Hospital. Their condition is out of danger now as she said.

The incident took place on Saturday when the girl Pranali Wargantivar(24years old) left the home without informing family members. she directly went to her boyfriend in the Markanda village and married to him, in a Shiv Temple.

The bride is a school teacher by profession and she belongs to the OBC caste. But the husband belongs to Scheduled Caste works on a private farm. The family of the girl was against “inter-caste marriage”.

When the family of girl mother (Vaishali), father (Ravindra), and brother (Sairam) came to know the truth of the inter-caste marriage of daughter Pranali. Because of shame in society, the family stopped eating food and left their home to commit suicide.

After going a few kilometers away from a rented house. the family came across the farm well. then jump into the well to end life.

Before committing suicide the family of girl filed a police complaint against inter cast marriage. But no action was taken by the police because the bride and groom wear adult. On Monday afternoon their dead body was recovered.

But active police team were successful to save the life of a newly married couple.