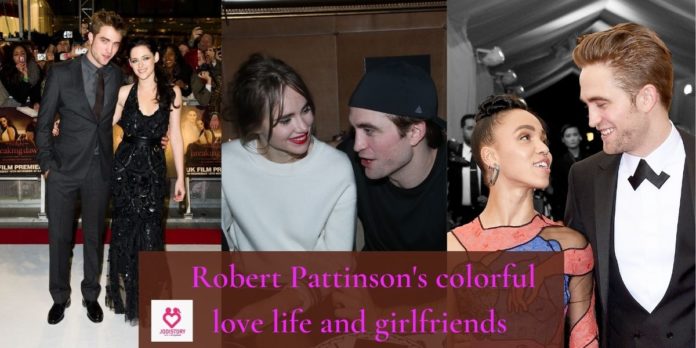 Robert Douglas Thomas Pattinson has mostly known for his movie Twilight novels. Recently he is featured in The Batman movie where he played the name role. Robert Pattinson is definitely really handsome to look at. And it is really obvious that he will get female attention from every age. And today we will dive down to his love life a bit and explore it deeply. I have researched everything about his personal life. And I have come up with everything about Robert Pattinson’s love life and girlfriend.

But before jumping into Robert Pattinson’s love life and girlfriend, let us see a bit of his professional life. Because Robert Pattinson has definitely done some great movies.

Robert Pattinson also acted on many other movies. Some of the are – ‘Remember Me’, ‘Queen of the Desert’, ‘The Lighthouse’, ‘Waiting for the Barbarians’, ‘Tenet’, etc. Pattinson definitely proved his acting skills for over 17 years now. And the audiences are also crazy about his personal love life.

So, Robert Pattinson and Kristen Stewart met each other on the sets of the movie Twilight. They were featured opposite each other in a romantic manner. The audience loved their chemistry onscreen very much.

She also added that they told Robert to back off that time because Kristen was only 17 years old. And it just melts our hearts to know that Robert Pattinson actually waited for the right time before start dating Kristen Stewart.

The couple had immensely powerful chemistry onscreen that just blew the heart and minds of the audiences and the critics. But, not everyone knew that they were dating at the point of time. Because they kept their relationship very private. Do you want to know why?

Once in an interview, Kristen Stewart told that they had to give so much for the movies. And that is why they were like, “No, we will never talk about it. Never. Because it’s ours.” The fans were crazy about these hot on-screen and off-screen couple.

But still, things did not turn to be good for Robert Pattinson and Kristen Stewart. The couple called it off in 2013 shattering the hearts of millions of fans. What went wrong in their relationship? I will give all the answers to your questions in the following portion.

Though the media reportedly spotted the couple at many places, they tried to keep it personal and private. Things were good between the two until one of them cheated on the other. Want to know who was that person?

It was Kristen Stewart who cheated on Robert Pattinson. The easy days of the couple came down in 2012 when Kristen Stewart was caught having an intimate moment with the director of ‘Snow White and the Huntsman’ Rupert Sanders.

Kristen mentioned that she had hurt the person she loved most and was very important to her and it was Robert Pattinson. But, Kristen Stewart could not please Robert Pattinson with the apology. Pattinson left the house where he and Kristen lived together.

As we know, Robert Pattinson is a handsome man and it is tough to not get female attention. Soon after Robert Pattinson’s break up with Kristen Stewart in 2013, he started dating English musician FKA Twigs in 2014.

It is interesting that Robert Pattinson’s love life was not going good but he met FKA Twigs and she became his girlfriend. Robert Pattinson and FKA Twigs were spotted together on the streets of New York City in 2014 but with a bunch of friends.

But the rumors started that Robert and Twigs were dating. And soon after Robert went to attend FKA Twigs’ concert with a bouquet of rose which added fuel to the rumors to be true. Later on, media spotted the duo together leaving the show and Twigs was holding the bouquet of rose.

Robert Pattinson and FKA Twigs made a cute couple. The duo got engaged real quick in their relationship. Reports say that Robert Pattinson had an engagement with FKA Twigs in April 2015. Robert and Twigs also bought a house to live together.

In 2016, media reports said that the couple broke off their engagement. But proving the rumors wrong Robert Pattinson and FKA Twigs arrived together at LA Dance Annual Gala.

Why did Robert Pattinson’s engagement and love life break with girlfriend FKA Twigs?

Robert Pattinson and FKA Twigs proved everyone wrong in 2016 but it seems like rumors are made to get right. The fans really hoped that the duo will marry each other soon.

But Robert Pattinson kept delaying the marriage which they planned in 2016. Robert Pattinson and FKA Twigs were really busy in their work schedule. And that is the main reason for them not working as a couple. They had to travel a lot regarding their work and could not make as much time for their own.

And this caused the harshest result for FKA Twigs and Robert Pattinson’s relationship. They had to part their ways apart from each other. And they broke their engagement and decided different ways in their lives.

The first report was by E! News that stated, Robert Pattinson and Suki Waterhouse were seen together in London cuddling and being affectionate towards each other. They were reportedly asked but there was no confirmation. Some media reporters have seen the couple publicly a couple of times. But they have ignored every situation where reporters would ask any sort of questions about their relationship.

From the beginning, the couple decided to keep their relationship very personal. But in June 2020, Pattinson confirmed his relationship with Suki Waterhouse.

The reason Robert and Suki kept their relationship private are because they think some things are better private. Robert Pattinson even stated that letting people know about a relationship too much decreases the value of love.

He also added,  “I can’t understand how someone can walk down the street holding hands, and it’s the same as when I do it and a hundred people are taking your photo. The line between when you’re performing and when you’re not will eventually get washed away and you’ll go completely mad.”

Robert Pattinson and Suki Waterhouse were rumored to get engaged. But the couple never admitted anything about it and soon the rumor died down. Robert and Suki are now dating each other for almost two years and it seems like they are really happy with each other.

Robert Pattinson and Suki Waterhouse are spending their quarantine time together in an apartment in London. A source told that the couple is enjoying this unexpected together time very much. The source also added that this quarantine time has only been a blessing in disguise. They are spending this quality time and it has helped them both to have that stronger bond.

So, I have come to the last of Robert Pattinson’s love life and his rocky journey of love where he finally found his girlfriend Suki Waterhouse. Things were not very good for Robert Pattinson. But everything seems really happy and sorted for him right now. His relationship with Suki Waterhouse is growing stronger and they are really in deep love with each other.

And let us hope the best for Suki Waterhouse and Robert Pattinson’s relationship.