Comedians have their usual custom of making a humorous sense in whatever they come across. But India’s stand up comedian Kapil Sharma was not joking when he announced that he was going to marry Ginni Chatrath. Today we will share love story of Kapil Sharma and Ginni Chatrath.

Kapil and Ginni knew each other for a long time since the college days. He used to go and perform his stand up comedy in Ginni’s college. Kapil met Ginni during one of the auditions back during the college days.

Kapil & Ginni did not date as usual.

Things didn’t go as well as there was a huge difference in their social status. And also due to the respective conservative families of both. Due to this reason, Kapil Sharma & Ginni never had any usual dating scenes or meetups.

Kapil mentioned that he fell in love with Ginni at first and then introduced her to his mother who also loved her. Ginni has been the person who has been with Kapil throughout his hard times.

Kapil said that Ginni is the one who completes him. The couple had together appeared in a comedy show in the year 2009. Kapil had mentioned that he had been working all the year throughout and it was of hectic and heavy schedules.

And thus he wanted to give time to his family, friends and moreover to himself. And that’s when he took a break from his schedule. And he went on trips and later into a more realization that everyone loves him. In this way Kapil Sharma & Ginni love story went on and on.

When Kapil shared the happiness and made it official. No one believed at first because they thought he was joking. But Kapil was not being a comedian when he announced about his marriage to Ginni. Kapil and Ginni got married on 12th of December 2018 in Jalandhar. 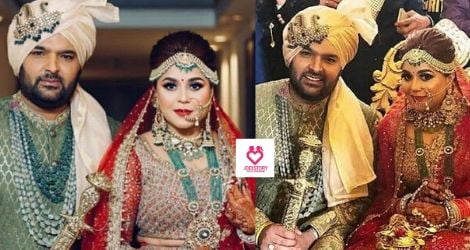