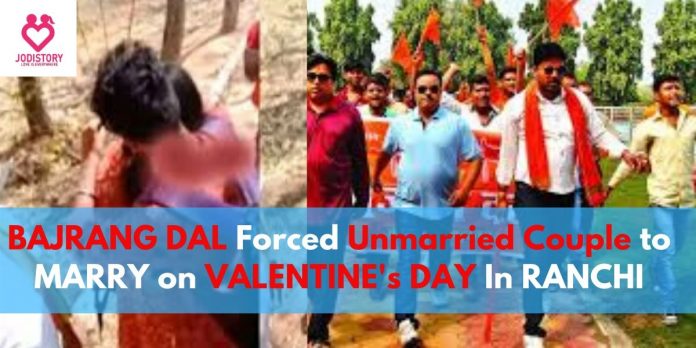 Ranchi- On 14 February 2020 Bajrang Dal forcefully made a couple married. The incident took place on Valentine’s in Oxygen park of Morabadi, Ranchi.

To celebrate the romantic festival an unmarried couple visited Oxygen park in Morabadi. They were just spending some time together.

Meanwhile, Bajrang Dal came in a group of 10. And caught the couple. Although the unmarried couple was just sitting in the park. They were not doing any vulgar action.

Instead of this, the Bajrang Dal forced the boy to apply Vermilion. The couple was helpless they could not do anything because of fear of Bajrang Dal.

In the meantime when Lalpur police came to know the incident. The police team reached soon on the spot. But till the Bajrang dal has fled away from the Oxygen Park.

We will update you as soon regarding the incident. Wait till new information to appear.