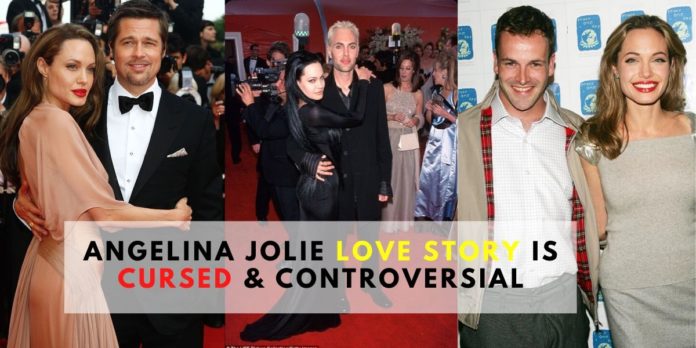 Lara Croft isn’t just a name to the movie lovers. The character that has got into our heart. But moreover it’s the personality who played the character, Angelina Jolie. This name isn’t just a small one in the big screens. Angelina is not just loved by the characters but also as an actress. People were always keen on knowing not just about her movies but also her personal life as well. Angelina Jolie love story is expensive, rumored and most controvercial in hollywood.

First Relationship of Angelina at age of 14

Jolie’s first relationship was at the age of 14, with her then boyfriend. The two had got into a live-in relationship during that time with the permission of her mother.

The relation, according to Jolie had its own emotional depth as it can be considered as a young age. The relationship was broken after two years.

In the year 1995, during the filming of “Hackers”, something happened. It was Jonny Miller who had hacked Jolie’s heart. The two were not in any relationship in the initial stage.

But the two ended up being in a relationship. They married in the year 1996.

Also Read: LOVE STORY OF KIM KARDASHIAN AND KANYE WEST: THE JOURNEY FROM FRIENDSHIP TO MARRIAGE

There is one interesting fact and a symbol of affection from Jolie’s part that showcased her love for Jonny. The wedding dress had his name. In her blood. But the couple ended up divorcing each other in 1999 but still remain friends.

Angelina next marriage to Jenny

Jolie had been in an active lesbian romance relationship. Jolie was with model and actress Jenny Shimizu. Jolie married to her husband.

The two had met on the sets of “Firefox”. Jolie even confirmed about her bisexual character and attraction towards Jenny.

It was during one of the interviews. And that, she had fallen in love with Jenny at that very moment itself.

“Pushing Tin” brought Angelina & Billy Bob together. The couple married in the year 2000. This duo was the favourite in the entertainment media. But the marriage unfortunately didn’t last longer. They divorced each other.

The most loved and accepted couple in Hollywood by both the media and the fans, Brad Pitt and Angelina Jolie. The couple were celebrated throughout the media. All about the kind of love relationship that they had and the bond that they were sharing. The couple had not been married.

The couple met in the set of”Mr. & Mrs. Smith”, where the two played the characters of “Mr. &Mrs Smith” respectively. During the year 2005. The couple later announced that they were expecting their first child in 2006. After all the years, the couple still remained unmarried but never let go of their bond. The couple welcomed their twin children in the year 2008.

In 2012, the couple revealed about their engagement. And this wasn’t a small news to the people. In August 23, 2014 the couple married each other. But the loved relationship did not go on too loving for long. The couple had various issues between each other.

In 2016 the relation ended up in divorce. The couple has six children. Including 3 of their biological children and 3 adopted children. The couple still remain in good terms for the purpose of a better parenthood to their children. Do not you think Angelina Jolie love story is miserable somewhere?