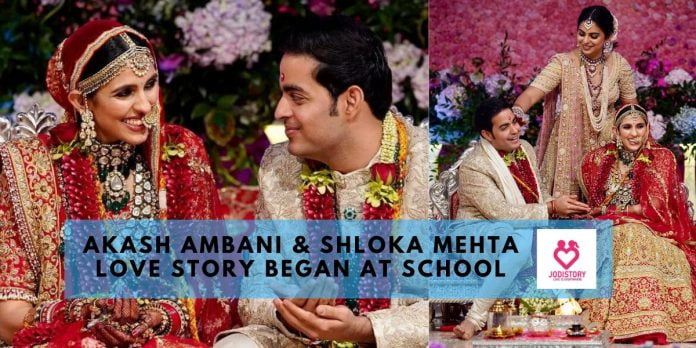 Even the biggest business tycoon has the fun-loving and romantic sides. And its totally different when it comes to Indian Business Tycoon, The Ambani family. They have set an example of how family relationships are. And how it can be maintained and balanced between the social business status. The same is with the elder Ambani son, Akash Ambani. The young tycoon proposed to his long-time sweetheart, Shloka Mehta. Shloka, Director of Rosy Blue Foundation and the youngest daughter of Russell Mehta. It is time to read Akash Ambani & Shloka Mehta love story.

Akash and Shloka knew each other since their small age. The two had been studying in the same school. The duo started dating each other after their schooling. And it is said that the young love blossomed with the blessings of both the families.
Also Read: Love Story of Mukesh Ambani and Nita Ambani: A Cupid’s Match

The couple had been dating for a decade. Although they believed and decided to get officially engaged with the blessings of both the families later.

After their schooling, the duo moved to different countries. To pursue their respective higher education. Shloka moved to Princeton University, New Jersey to study Anthropology.
She then completed her Masters in Law from London School of Economics and Political Science. Akash moved to the US to do his major in Economics. They remained in a long distance relationship until recently when they made their romance public.

Akash proposed to his lady love in March 2018 at a place in Goa officially announcing the love and happiness.
Also Read: SATYA NADELLA AND ANUPAMA NADELLA LOVE STORY: THE MAGICAL LOVESTORY
After the Big Fat Indian wedding of Isha Ambani, the duo is expected to tie the knot very soon. And the expectations are not too small.

Their marriage is considered one of the expensive marriage of India. Many Bollywood, Hollywood celebrities along with world fame politician attend their wedding.