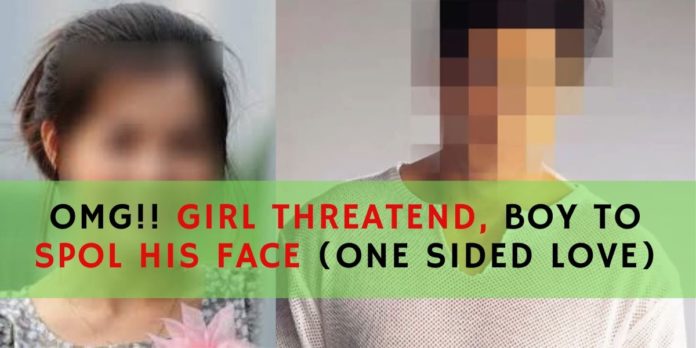 We generally hear the news that boy threatens, harass or teases a girl. But an opposite incident took place in Bareilly district of Uttar Pradesh. Here a school girl falls in love with a school boy very badly. And she threatens the student to spoil his face. As mentioned first in the livehindustan.com.

It is a one-sided love situation from the girl’s side. She was continuously making pressure on boy to accept her love. When the boy came to know about her feeling he tried to to convince her.

He told her to focus on studies and all. But the girl did not agree with the boy because she was in love with him madly. Everyday she stopped the student and talk to him.

After sometime the student getting worried about the situation. He tried to calm down her childish love. He refused the proposal many times. Then instead of understanding the matter.

She started threatening the boy. and said” if you have so much proud of your face then I will spoil you”

The student was so nervous after threatened by the girl. He did not inform the situation with anyone. But his face was little injured. After watching injury when his father asked the reason behind it.

Only then he confessed the whole thing about that girl. He told that a girl was threatening him for long days. Because she is in one-sided love with him. She tried to spoil the face.

But the girl was only threatening him to accept her love. She was not threaten him by the intention of harming.

She had no idea that he might get injured in real. The girl turned to panic and fell unconscious at the moment.

When the crowd gathered to pick up the students. And was taking them to t Pilibhit Road for first aid. But on the crowd girl disappears suddenly.

Whereas on the situation Police in charge of Rithaura outpost Pawan Singh said” there is no complaint or Tahrir came to him. If the complaint is made. Then action will be taken. But till now an investigation is going on.

The victim did not make a complaint

People asked the student’s father to make a complaint against the girl. But it seems like both the father and son are extremely horrified about the situation.

They are saying that they are not getting to understand what to do to calm down the situation. Although at first they were going to the police station to file complaint.

But then they change the plan of complaint against the girl. He took his son for treatment rather than complaining to police station.

When asked to school principal on this panic situation. People told that he was unaware of the situation. Because the incident took place outside of school.

It was a normal fought took place between the students. The whole situation is still unknown. We will get the information about the situation tomorrow because the exam is going on campus.