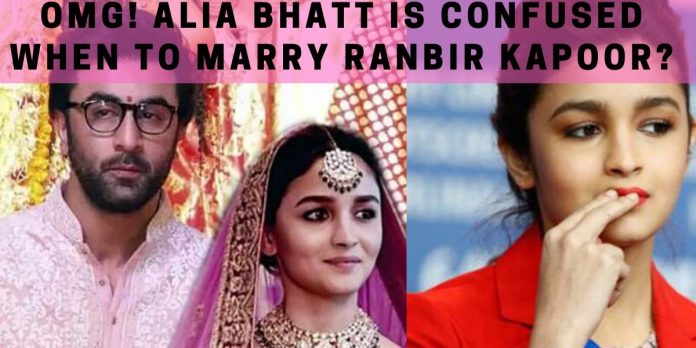 The fans of Alia Bhatt and Ranbir Kapoor are waiting for their marriage. Actually the couple did not announce the marriage date yet. Actually Alia is confused between movie and marriage as mentioned in Dainikbhaskar.

Alia’s next biopic movie is based on a sportswoman and mountaineer Arunima Singh. The is producing under Karan Johar’s Dharma Production. According to the source of Dharma, the schedule of the movie is being decided according to the proposed date of Alia Bhatt’s marriage.

Alia Bhatt will marry Ranbir Kapoor at the end of 2020. But she will complete the shooting of biopic before marriage or after marriage is not finalized yet.

The biopic will come on the floor in March-April

Maybe the biopic will soon come on the floor. The expected time would be March-April. Being a mountaineer Arunima Singh herself give the training to Alia for the biopic.

Alia is now busy finishing the shooting of “Gangubai”. After that, she is ready to spend time on training. But in case of shooting for a biopic. Still, Alia is confused. Shooting first? Or marriage? A grand dilemma is popping up in Alia’s mind and heart.

Actually, Alia is very excited and emotional about marriage. She is wishing to keep her personal space for such a memorable moment. Alia is busy deciding how to manage marriage and shooting between October & December?

The marriage date will come between October to December.