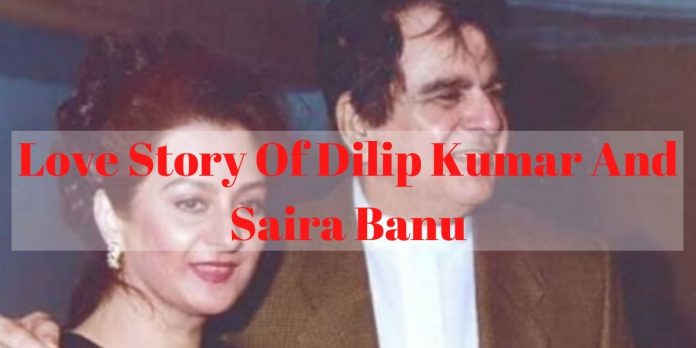 This Bollywood couple is known for their strongest relationship in the B-town. As the Bollywood industry is considered to be the most flickering relationship builder, they proved us what real love story is. There are very few couples who have strong essence of love. Let us read one of a great couple Dilip Kumar & Saira Banu love story.

Their lifelong devotion towards each other tell us the emotions of eternal love. They both have always stood by each other through the thick and thin. Their love story overcomes the age gap of 22 years and is still counted amongst the evergreen love.

It was like a fairy-tale romance of Dilip Kumar and Saira Banu. As Saira unfolds the story later on by telling that she was a huge fan of him. Like all other girls, Dilip Kumar was a dream man of Saira.

Saira was in love with Dilip Kumar from the age of 12. When Dilip Kumar’s movie Mughal-e-Azam was premiered in Maratha Mandir, Saira went to watch the movie just to get a glimpse of him.

On that day due to some issue he couldn’t make the presentation, she was heartbroken. Saira finally got his first glimpse in real life.after some time.

And that moment was an actual fan moment for Dilip Kumar. Saira still remembers that moment very clearly.

Saira started her career as an actress and soon she achieved her dreams. As soon as she became actress the controversies started ruling her like all other actors. She was linked up with many co-stars by the people.

Saira alluring beauty and charm won her many movies with the then leading actors. Later on, her mother brought them close breaking all the controversies.

She became their medium through which they confessed their love for each other. Finally, with the blessings of their families, they took a decision to get married.

Finally, Saira and Dilip Kumar got married and started a fresh life, she became a perfect homemaker. Many predicted that their relationship would no more last, due to the age gap between the couple.

But to everyone’s shock, their love continued facing many struggles and challenges.

It was heard that Dilip Kumar had an affair with Asma after marriage but it didn’t last long and he came back to Saira. Their love for each other is constant and evergreen till now.

After marriage, she continued with her filmy career and made selective choices in films. She soon adopted the role of a perfect homemaker and a successful women.

Dilip Kumar is going through health issues and Saira has stood by his side proving that love is immortal. So adorable Dilip Kumar & Saira Banu love story.