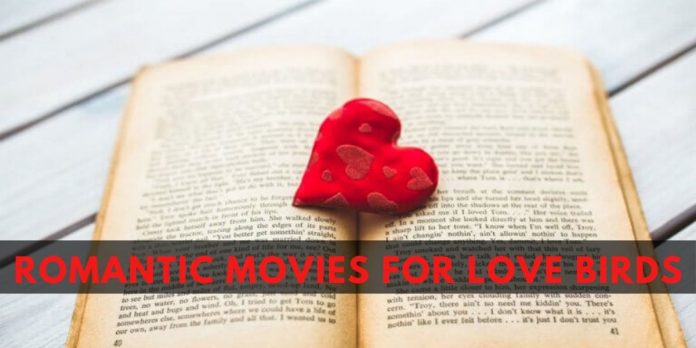 Love is felt, lived and portrayed in some romantic movies. Some love story movies are meant to be forever… etched in our hearts for eternity. As said ‘Love knows no language’. Literally, it does.

So, step into a world of romance, music, and color with our pool of the premium romantic movies of Bollywood and Hollywood.

It is a romantic drama comedy film. This romance set amid London’s Indian diaspora was a landmark in Hindi films. One of the best-loved screen couples of all the time, Kajol as Simran and Shahrukh as Raj. They fall in love in European rail holiday trip, but they return to London. The couple wants to get married against their parent’s wishes. This is followed by a struggle for winning over their hearts by the leads.

DDLJ holds the world record as the longest-running film in the history of Indian cinema. A movie with 700 weeks of continuous screening in a Mumbai Theater.

As end credits roll, here’s the last line of the movie: “Come … Fall in Love“. But you will rise in love after watching this.

A love triangle on stage, literally characters: Rahul, Pooja, and Nisha who are performers. It is one of the unforgettable romantic movies of all the time. A movie with a romantic music giving love altogether a different face.

SRK as Rahul indifferent to ‘love’, Karishma Kapoor as Nisha is featured as a full-of-life dancer. Nisha secretly has a feeling for Rahul.

But Rahul fells for an already engaged girl who believes in true love and waiting for her prince charming Pooja.

Who will get one’s love and who will be left heartbroken? Must watch the movie to know this exciting love story. SRK wooed everyone with his signature dialogue ‘Rahul. Naam Toh Suna Hoga’.

A happy go half Italian, Sameer (Salman Khan), Purpose of learning music finds his way in a mansion in Gulf of Gujarat in India. End up losing his heart to his teacher’s daughter, a blue-eyed beauty, Nandini (Aishwarya Rai). Both get off to a rocky start but eventually, their romance reaches greater heights forms the first half of the film, but it is the second romance that is truly moving.

Nandini due to her family pressure ties knot with Vanraj(Ajay Devgan), who fell in love with her.

The twist turns the on the face of its story into a very straight one, that of love happening pre-marriage but realized post to it. Whom she chooses one for whom she is living or whom she is love forms the climax?

Go watch the movie and feel the depth of love.

A budding romance revolving around the plot of crime. The featured actors Hrithik Roshan as Rohit and Amisha Patel as Sonia set the screen on fire with their power-packed performance.

Sonia, a brat, and a salesman Rohit develop an instant liking for each other.

But their financial status creates a tense atmosphere around. The young girl bumps into a lookalike of her dead boyfriend and comes to know the truth of his wasn’t death but murder.

An intense love story with the essence of romance. Mesmerizing dialogues: ‘Loss of a person from your life doesn’t end your life but only the part of that person in your life’.

Henry Roth – an oceanic veterinarian with an endowment for dating womenfolk and a fright of commitment.

One day Henry’s boat halts down during a sail, lands at a snack bar, waiting for help, gets smitten by a young woman named Lucy Whitmore, who styles architectural art with her gobbledygook.

He thinks she is a local and therefore prevents him from introducing himself but the next day he comes back and instantly hits off and she asks him to meet her again tomorrow morning.

He again goes to meet her the next day but she doesn’t recognize him. What is the relationship between the two? Did they meet again? How does Henry make her remember him? Watch the movie to know what happens later in their lives.

This film is a moderation of the old classic Cinderella story. Sam Montgomery lives with her widowed father Hal, who runs a popular sports-themed diner.

Realizing needs for a mother for his daughter, ties knot with Fiona, a futile and egoistic gold digger, Brianna and Gabriella, her socially-awkward twin daughters.  Hal misbelieves that Fiona will be a good mother. During the 1994 Northridge earthquake, Hal loses his life in an attempt to protect Fiona.

Also Read: Love Story Of Lionel Messi: A Story Everyone Dreams Of

Having by all accounts left no will, Fiona obtains all of his properties, plus the diner, the house,  and to her shock, Sam.

Sam now does full-time housework as ordered by Fiona, so that she can earn money for her college. Sam reveals in her online pen pal “Nomad” about her fantasy to attend Princeton, a dream which he also shares.

However, Nomad’s real personality is yet to be revealed, Austin Ames, the popular, yet unhappy, quarterback of the school’s football team. Do they belong together or have something in common. Will nomad accept her if her identity is revealed?

One day, Sam finds a hidden will in her childhood fairy-tale book that completely changes her life.

The story moves from seven years in the past, created as a sequence of episodes that take place at a turning point in each character’s life, to three years to two and finally arrives in the present day.

Emily Friehl (Amanda Peet) and Oliver Martin’s (Ashton Kitchen) first encounter is on a flight from Los Angeles to New York City. He certain of his future success aspires to become an Internet entrepreneur and, gives her his mother’s phone number and suggests she call him in six years to see if his prediction came true.

Three years later, fronting the vision of spending New Year’s Eve alone, Emily finds Oliver’s number and calls him, and flinches a chain of gatherings with the passage of time, as each jump in and out of affairs with one another, Oliver and his business partner Jeeter runs an online diaper service, and Emily grow into an up-and-coming photographer.

Each time they meet, one seems to be established and happy while the other is stressed to excel in both life and career. Eventually, they come to the insight that each is just the person the other one desires for success.

This romcom was much-loved superstar Kareena Kapoor and Shahid Kapoor. Kareena’s as Geet portrayal as a lively Punjabi girl who meets Shahid as Aditya on a train. A depressed well-to-do capitalist finds his life changing after he meets a spunky and care-free young woman. The trouble is Geet is in love with someone else …ends up she is in a similar state as Aditya

A roller coastal ride with spectacular locations is about the chemistry between the couple, who were known to be an off-screen pair at the time.

Every shade of romance from humor to love to emotions. A movie with the spice of romance and adventure.

It is a 2009 American romantic comedy film directed by Anne Fletcher and written by Peter Chiarelli. Margaret Tate is a Canadian executive with an expired visa and is soon to be deported. She wishes to retain her position as a chief editor at a major New York City book publisher and therefore she convinces her assistant Andrew Paxton to temporarily act as her fiance. A U.S. immigration agent, informs them that he suspects they are committing fraud to avoid her deportation and tells them that they’ll be asked questions about each other separately. They spend the next few days in Alaska to celebrate Andrew’s grandmother’s 90th birthday. Their lives take a turn when they spend days and night together acting as a couple. See how their hatred turns into love.

Me before you is a romantic drama film by Thea Sharrock. It’s a film based on a novel written by Jojo Moyes in 2012.

It’s a very cute romantic comedy film that is bound to make you smile and weep at the same time!

Louisa Clark also called Lou is a 26-year-old woman who is funny and creative. She gets a job as Will Traynor’s caretaker who recently got paralyzed for life in a motorcycle accident which made him depressed and he wanted to end his life because of some reasons.

Also Read: How To Have A Happy Long Distance Relationship ?

His mother intends to show that, in time, he will believe his life’s worth living. Lou tries her level best to convince him and show him ways to live. But did she succeed in convincing him? Watch the movie to know how the story would take a sharp turn in the end.

So, love isn’t just hormonal imbalance but an emotion which can drove you far away with a feeling for your loved one. Once you watch these movies you will realize the indefinable feeling of the three magical words ‘I Love You’.