Not every love story is meant to end in the beauty of being together. It’s a great struggle in overcoming all the troubles and end up being together.Miley Cyrus made hers a celebrity life at a very young age itself. Even before Liam Hemsworth had made his entry into the celebrity world. But today we will read Miley Cyrus & Liam love story.

17-year-old Miley met 19-year-old Liam on the sets of “The Last Song” in the year 2009. That is where the unconditional young love blossomed. Miley said that Liam had become her best friend during that period.

She has always respected the hard work Liam does to his work. The two had been spending their time together both on and off screen as well.

The two appeared to show up together during various occasions and events as well.

Liam proposed to Miley with a giant 3.5 carat Neil Lane engagement ring. The young couple got engaged in the year 2012. It was like a dream come true for the young celebrity couple being into their happily ever after life.

The two in love couple split on September 2013 after a long relationship and in spite of being engaged.

There were reports about the two being seen hanging around with each other in the year 2015. And these reports were confirmed in 2016 that the two are back together for another time.

The real old love had hit them once more. Miley Cyrus & Liam two really couldn’t get over each other after the breakup and just proved how deep their love was.

The survival partner. That’s what Liam is for Miley. The duo got married on 26th December 2018. 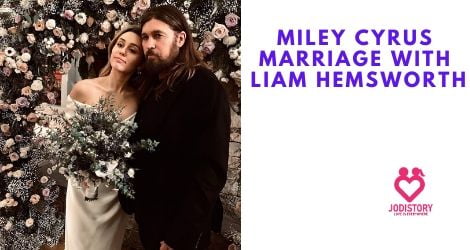